Grow Your Relationships with an Open Heart

It’s not something most of us would admit to, at least not openly…but, nevertheless, it’s true: when it comes to many of our relationships ¬– with family, friends, or lovers – or even a simple encounter with a stranger on the street – there often come times when a little “push” turns into a “shove.” And before we know it, we’ve either hurt someone we didn’t mean to, or…we’ve been hurt and beat a retreat. No judgment here. We’ve all been there, done that…and not just once! For the most part, it may all seem fairly innocent. But, behind the curtain of each incident, something is growing in us that guarantees the only change we can look forward to in our relationships with others is what we blame each other for. Here’s why.

Despite our best intentions, these conflicts have a strong tendency to repeat themselves. Before we even know it, certain painful patterns get formed. We’re more and more easily moved to act in anger, or to speak out of frustration. And so it comes to pass: with each iteration of this irritation – each time we feel “rubbed” the wrong way – a kind of callus slowly forms around our heart. This kind of hardening seems innocent enough; it grows “naturally,” much in the same way as do stalactites in a cave.

We’ve all seen what these strangely shaped structures look like, either in a book, or on film. They hang like dark colored icicles from the roof of a cave; and, to the point, they are formed by calcium salts slowly being deposited on them – layer by layer – by the steady drip of mineral-enriched waters.

With this image in mind, consider the slow but steady “drip” of feeling disappointed, betrayed, or disrespected by another. Can we see the parallel? Each negative reaction to some unwanted moment in one of our relationships has a distinct, but very similar effect.

Slowly, but surely, we form a kind of shell within and around ourselves to keep from being hurt again. But, while this self-protective layer seems to insulate us from further emotional injury, it accomplishes this dark undertaking at a terrible cost to us; in truth, to all whom we might ever care for.

It should be obvious, but it’s not: we can’t protect our heart and keep it open at the same time, anymore than it’s possible to be covered by a shadow, and feel the caress of a sunbeam touch our face.

The more we unknowingly agree to be guarded by these shadows of old fears and lingering regrets, the less chance we have of experiencing the unexpected delight of discovering and exploring something new…not just in our partner, but within ourselves as well.

Imagine a young child who can’t understand why a small, beautiful potted rose their parent gave them to keep on the ledge of their bedroom window has stopped growing; even worse, it’s started to wilt. Nothing they do to nurse it back to health works. They don’t want their parent to know; they’re afraid, maybe embarrassed that something’s wrong with them.

Fortunately, the parent is able to see that something’s troubling their child, and soon discovers the withering rose that has been hidden. The parent smiles, and explains to the child: “Little one, you’ve done nothing wrong; we will soon make things right. Your rose has stopped growing because its roots have outgrown the original pot in which I gave it to you. If you want it to be healthy and happy, to be able to keep growing, we have to move it into a larger pot, which I’ll be glad to help you do.”

When it comes to relationships that are feeling stunted, too well worn, or somehow too wearing on us – where we may be trying to hide how we feel, or blaming ourselves for some failure – we need a similar solution as just illustrated above: what we need is a bigger “pot.”

Just as a rose can’t survive and thrive when its roots are confined, neither can our relationships flower in a like situation. Only in this case it’s our heart that’s contained, stuck behind a wall of preconceived notions that don’t just create limitations in our relationships, but that also keep it locked out of the love it longs for above all else. 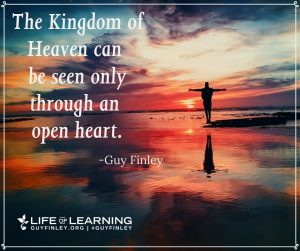