The Relationship Magic of Unconditional Love

Whenever we’re filled with blame, unable to see anything but one side, “our side,” of the story…

…In these, and in any moment where we find ourselves set against the one we love, we have been rendered effectively blind to a bigger story that we can’t see, even though it’s right before our eyes: the pain in these moments isn’t just mine, and neither is it just yours; it exists as it does because – one way or another – we’re (in it) together; which means…it is ours.

If we could become conscious of this invisible similarity, be aware of how our partner suffers just as we do – even though their suffering may name itself differently than does ours in that moment – then we could no longer be played against one another.

We’d be unable to say hurtful, heartless things, or take some unkind, thoughtless stand. In this awareness of our secret similarity not only is it given to us to know some measure of our partner’s pain but, because of this higher relationship, we could no more wish them more of that suffering than we would wish it upon ourselves.

I know that these last ideas are a lot to take in, especially given what is likely, for many of us, a history with partners past or present replete with unresolved bitterness. So, it’s more than possible at this point that you may be thinking something like:

“You’ve got to be kidding! I can barely deal with the pain I’m already in, especially in the throes of some familiar argument with my partner. So, why on earth would I want to realize, let alone share a measure of their suffering?”

The answer is as beautifully simple as it is remarkable for its compassion: anytime we know someone else is suffering, and have some awareness of that pain as being the same as our own – we cannot add to it.

This power of being unconditionally kind towards those who unconsciously hurt us is just oneof the gifts of higher love. In a way, it gives our heart “eyes” that can see what they were blind to before.

For example, by its light we’re able to see that the needs of our partner are really the same as our own, an insight that makes it impossible to mistake their pain as being somehow less important than our own. So that now when our partner dumps on us a pain they don’t know what to do with – demanding we pay for a suffering they only know to blame on us – we’re able to do what before would have been impossible:

Without any outward announcement to mark this moment, instead of being dragged into some too-familiar fight, we say, silently, to our partner the healing words we learned earlier, “This one is on me.”

We agree to make this sacrifice because we’ve seen that our partner can’t yet understand, let alone know how to use this pain that only exists between us. So, for the sake of a love that’s greater than the both of us we consciously refuse to say or to do a single thing to make their pain worse. It’s not because we’re somehow better, superior to our partner. We know better than that now. It’s because there is a higher power at work here – an order of love that is incapable of being unkind, even to someone who may have hurt us. And it makes possible a kind of sacrifice of one’s self that ego can’t conceive, let alone find the will to enact.

This is an act of unconditional love.  It is true relationship magic. 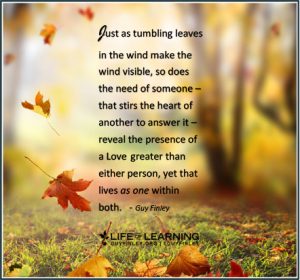