The Power to Leave Painful Thoughts and Feelings Behind You

Just as a storm in the atmosphere of the earth is born of conflicting fronts of different temperatures colliding with one another, so too must there be conflicting forces within us in order to form a mental or emotional storm. Our task is to become conscious of these unseen forces that dwell in the unenlightened parts of us. As we grow to realize that no disturbance can remain within us without our granting it the force it needs to sustain its fury, we realize that we have at our disposal two great powers. We are empowered to dismiss storms when they appear in our psychic system and, with time and practice, we can learn to dismiss these disturbances before they begin!

What are these invisible conflicting forces at work within us that cause so much foul weather? We uncover the first of these unconscious forces by recognizing that the storms in our lives all share a common cause. Each storm, large or small, centers around something that happens to us that we don’t want to be happening for whatever reasons. A few quick examples prove this insight, but best success is assured if you will fill in the blanks from your own experience.

Imagine a woman caught in an emotional firestorm of anger because she does not want to be treated like that. Or a man who feels trapped by a tormenting depression because he doesn’t want what life continues to bring to him. Can we see that these two storms share a common root? Both rise as they do because of our unconscious resistance to something that has already happened.

Whenever we face an unwanted event and find ourselves feeling nothing but resistance, we can discover that this stress-mess is made from our insistence that this should not have happened. And how about when we recall past mistakes, painfully reliving how we fell down — either a moment ago or ten years back? Aren’t we sure that whatever that error may have been — it shouldn’t have taken place?

Which brings us to the following insight that deserves a few moments extra consideration. It feels natural for us to go along with the feeling of not wanting what our not wanting is powerless to change!

What on earth lies hidden in this strange struggle of ours that compels us to wrestle with what amounts to mental ghosts? After all, once something has happened in our life—that moment is over; it’s gone, done with, finished. Clearly, what was no longer exists in the here and Now. So, we have to ask ourselves, given this understanding that is above dispute, how can something from our own past feel as real and as alive as it does to us in the present moment? The following answer brings us one step closer to living in a world without storms.

Within our mind lingers an untold number of chemically and electrically stored images of the way things were. These mental pictures include complete scenes of every experience past, as well as pleasurable images of achievements yet to come. And these same images are secret storehouses of all the sensations that accompanied them in the moment of their creation. Each one is laden with its original emotional content that pours into us each time we revisit them.

The only reason we ever find ourselves caught in a psychological storm is because we have been drawn, without knowing it, into identifying with –actually merging with — mental images from our past. These images are pre-loaded — rather like psychological time capsules — with punishing thoughts and feelings that flood into us the instant we identify with them. As the invisible, but psychically palpable blows from these painful memories pour through on us, we are unconsciously moved to try and resist them — all of which makes us feel as though we are trapped in a storm about which we can do nothing other than try to escape its lashing!

Once we invite the following insight to become our own, we need never again endure the pounding of such negative states: No storm of mental torment or dark, emotional suffering belongs to you. Any wave of resentment, anxiety, or fear that comes to wash you away is nothing more than a kind of psychic residue left over from who you once were. Not only do these negative states have nothing in common with your True Nature, but they cannot enter into the living Now where this higher consciousness lives.

This same truth can be said in a slightly different way: we cannot be punished by any painful storm when we are grounded in the present moment. The reason for this perfect protection is as pure as it is simple: Psychological storms are powerless to push their divisive and destructive forces into the spiritual harbor of Now because, within its native wholeness, they have no way to remain there.

The storms we suffer are not born simply from any particular event that takes place, but rather they rise from an unknown ground in us due to our undetected resistance to them. These unwanted events that we so strongly resist are not the actual events themselves. What we secretly struggle against in these moments are unwanted images of that event fashioned by ourselves. This occurs, for example, when we imagine a fearful future, or see ourselves thrown for a social loss of some sort. In these moments we suffer, as we do, because we are looking at what we don’t want to see. And then, because we don’t know that we have been tricked into giving these negative fantasies our attention, we try to imagine ways to escape their punishing presence. The more we struggle to get away, the more attention we inadvertently lend to what we wish would disappear! It’s a great paradox: not wanting to look upon what is bothering us keeps what is bothering us in plain view! But now we are beginning to see our way out of this trap.

From this moment forward, whenever some dark storm appears in us we must neither run from it, nor stand there and hate what we think is happening. Instead we must awaken to ourselves, bring ourselves back into the Now and quietly, deliberately, drop any image that our thought-nature presents within us to justify the brewing conflict. Learning to dismiss the storms that sink our chances to be happy takes dedicated inner work, but you may be assured such powers are possible. Your True Nature already dwells beyond the reach of self-wrecking storms. Join it; begin Now! 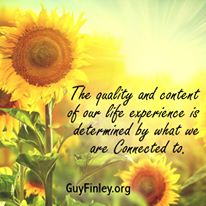