Law of Attraction in Action: Trying to Run from Problems

I had a client who hadn’t been happy for a long time. She couldn’t find a job she loved, was frustrated about not having had a boyfriend in years, and her inability to lose weight. Whenever I made a suggestion she made an excuse for not being able to do it. She refused to try to use faith to help her because she had a bad experience with religion as a child. She tried eating healthy but didn’t lose weight so why bother? Kim said she wanted to be happy but her behavior showed she preferred complaining to taking action—except to try to run from her problems.

Kim called one day and said that she decided to move to another city to get out of her rut by getting a fresh start. She’d saved her money and would be able to survive until she found work. I suggested that she work on herself first. She insisted on moving and picked city that sounded good. Three months later she called to say she was back home. Her move didn’t work out. She couldn’t find work she enjoyed and didn’t meet many people. It made her feel even more negative than before she left.

When you relocate, all your baggage goes with you. Your negative vibrations stay with you and the Law of Attraction will pick up on it wherever you are and keep the same stuff coming to you. Kim decided to do temping until she figured out what to do. A few weeks later we had a session and she was excited. Someone told her that Minneapolis was a great place to live and she was thinking of moving there.

Once again I suggested she straighten out her issues before relocating again but shortly after she was on her way north but that too didn’t work out. She got depressed that she couldn’t find happiness in either new city. I told her it was because she hadn’t changed. She got angry and went on about how she went to a lot of trouble to make a change. I told her that wasn’t change. She was running away from her issues but they went with her to the new cities.

The change needed for happiness must come from inside of you, not from relocating, which is actually trying to run away from yourself and your inner turmoil. Wherever Kim moved she took her issues with her. She was unhappy with herself and that affected her other situations, including not being able to love herself. Her discontent stemmed from that and filtered out into all areas of her life. So no matter where she lived Kim still saw herself as unworthy of love and joy so she got none. She couldn’t attract what she said she wanted because her vibration and attitude said she didn’t deserve it.

Change is good but you need to change the right things—first those inside you. If you change your job before you change your vibration by making yourself content you won’t be content at the new one either. If you don’t love yourself you can move to another state and still find it hard to attract love. I told Kim she had to change from the inside out but I didn’t hear from her again for a year. When she finally reached out she confessed she’d moved 3 more times and was still unhappy. She was finally ready to work on herself with me.

If you aren’t happy, moving won’t change anything because your vibration and patterns of behavior and thinking go with you. The Law of Attraction doesn’t try to interpret what you put out. It brings you what it gets from your emotions and inner beliefs. So before you try to relocate for a better life, make peace with yourself first. Build your self-love so you feel deserving of what you want. Clear the emotional blocks that keep you from getting what you want. Then you’ll have a positive vibration to take with you when you move. 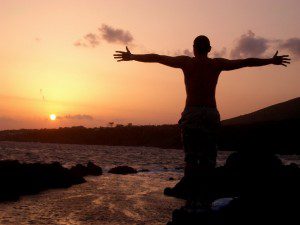