Law of Attraction in Action: Control

This is post 50 in my series on the Law of Attraction in Action. You CAN use your power to attract all that you need. I do it every day! Read the posts in this series to see how.

I’ve been going through a bit of a rough spot. I have so much on my plate but often go in circles. Perhaps it was the higher than usual heat and humidity we’ve been having. It keeps me form sleeping well, even though I have good AC. Kind of permeates me. Being more sedentary in the heat, combined with attending a few parties and more dinners out than usual made me gain 4 pounds in the last few weeks. I’d been doing fantastically well with losing weight over the last year and didn’t like seeing the scale go up.

Plus, paperwork was piling up and the general clutter around me felt bad. I didn’t like seeing so much stuff around. With all my deadlines, I’ve been dropping mail and other stuff on my dining room table. Stuff to be filed was on a chair, then on the floor as the chair couldn’t hold it all. I had a box sitting in the middle of the space I use for an office and couldn’t remember why I kept it, but it sat there screaming at me!.

Clutter, extra pounds, disorganized! Over the last few weeks I sent a message to the Universe that I was out of control since that’s how it all made me feel.

And I continued to feel out of control. Whenever I need to take control I clean. I’ve written about that BEFORE. It’s always good to clear stuff out to make room for new and better things. But while I write about this stuff and live it most of the time, I too can lose myself in the chaos of life. It’s so easy to fall back into old habits when you feel overwhelmed. That’s why I call myself a recovering DoorMat. I can still awaken the tendency to be agreeable if I’m feeling vulnerable but consciousness gets me back on track.

Last weekend I’d had enough! I needed to let the Universe know I was ready to take back control so the Law of Attraction would help me get what I needed.

First I shouted that I was ready to take back control and thought about what action I could take to show I was serious. I felt tired and knew I couldn’t do everything at once. So I thought about what bothered me the most. I didn’t like my weight going up. I was gaining from a combo of being inactive due to the weather and eating a lot of decadent food, and much too much.

Taking control of my health is my priority so I chose to eliminate most sugar habits from my diet. I did that last fall and it had a dramatic effect on my body.

I didn’t completely cut sugar. I broke my sugar habits. Since I was young, I had a Starlight mint after every meal. I love them and often had two or three. It was a habit since I was a teen. I automatically reach for one after eating. So I stopped, cold turkey on October. It was hard. I had to stop myself from reaching for one. I also cut desserts during the week but still allow myself a sweet on Saturday and Sunday afternoon.

Growing up we always had dessert after dinner. While I often had small things, I had sweets every night, again as a habit. I stopped that too. Now on the weekend I have my sweet after lunch, so I’m not doing what I used to. I LOVE sweets and it was hard to let go of them—the first time in my life I did this! During the first week I felt like I was in withdrawal. I drank a lot of water and passion iced tea to cope. And did lots of affirmations, like “I’m taking control of my eating to make my body healthier.”

Taking control felt so exhilarating that I didn’t cheat. And I lost weight just from that.

When people asked me if I was dieting, I said, “No,” I’m just breaking my sugar habits.” If I was out and everyone had dessert, I’d have some because it wasn’t a regular habit. But I limited those splurges to a few a month. I’ve slowly lost about 10 pounds since then, and kept them off till recently. While I put things aside to write and make my deadlines, I became more sedentary, left more stuff piling up, and ate more.

Taking back control feels much better!

I didn’t diet but showed the Universe I was serious about losing weight and stopped my desserts and other sweet treats. I began to lose the pounds I’d gained. I’m very serious and the more I talk about it out loud, the more I feel my body responding. Friday I began to get fabulous messages that I was being heard. First someone sent me an article out of the blue about the Law of Attraction that reminded me of things I’d stopped doing. Then I saw someone talk about the same things on TV.

It felt the Universe was sending me cheerleaders. It truly got my head into the right place.

I began cleaning and organizing with a fury. The more I put it out that I had to take back control of my life, the more things happened that encouraged me to do so. The more I took charge, the more I felt better and in control. The synergy was amazing and now I’m much more in control of my life than I was a week ago. Just looking at my clean office makes me smile. So does looking at the scale. I’m still in sugar withdrawal, but it’s getting easier. When I’m tempted to reach for a sweet, I remind myself how much healthier it is not to and that I can resist.

The more you take control of what’s happening now, the more you control what comes back to you.

I feel so much better but am always vigilant about backsliding. It’s soooooo easy to do! But it’s one step, one day at a time. If I begin to lose control, I find something I can take control of, like cleaning out a draw or my file cabinet. Taking control brings many rewards. For me it’s a cleaner living space and healthier body!

See all the Law of Attraction in Action Series.. 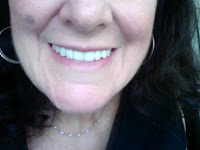