Law of Attraction in Action: Revenge 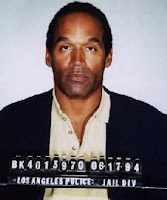 This is my eighth post in my Monday series on the Law of Attraction in Action, inspired by watching Louise Hay’s You Can Heal Your Life, the movie, expanded version. This DVD is much cheaper than The Secret and the bonus talks by some of the best experts on using spirituality for your highest good make it a lot more substantive!

On Friday, OJ Simpson was convicted on all counts in his trial for stealing his memorabilia back at gunpoint. For the first time, I saw the smug, arrogant smile disappear from his face and it felt great! I admit, I believe that OJ murdered his wife, Nicole Brown Simpson, and her friend Ron Goldman. When he was acquitted for those crimes, I was furious. And when he so disrespectfully and egotistically wrote the book, If I Did It, I wished him great evil and wanted to punch him out. But instead, I looked up and expressed that I’d leave the revenge up to God.

I did ask Him to do what would be the most appropriate form of revenge.

When someone does you wrong, it’s normal to want revenge. You may try to figure out how to get even or want to tell the person off in a forceful way. Stop those impulses and let the Law of Attraction get revenge for you! It will, especially if you let it. Why do I advise that you don’t get the revenge yourself?

* Going after revenge keeps anger burning in you. Thinking of ways to get even puts negative thoughts out to the Universe. Anger NEVER feels good! Metaphysical Science (the mind creates physical ailments) attributes holding onto anger as the cause of cancer. It also creates other physical problems.

* Going after revenge keeps what happened on the tip of your thoughts. It makes you talk about it with friends and plot how you’ll get even. That can keep you stirred up. The Universe doesn’t interpret why you want to hurt someone. It does bring you back what you put out.

* Going after revenge wastes energy that you can use to do something good for yourself. A majority of people don’t feel better past the moment of doing something to get back at someone. Negative revenge isn’t sweet. It often keeps that person in your life, especially if he or she decides to get back at you for your revenge, which can create a vicious cycle, supported by the Law of Attraction.

* Going after revenge is unnecessary, since the Law of Attraction works better than you can. It will come at the right time in the best way possible. Accept that nothing you can do for revenge will undo what the person did or make up for it. Hurting the person doesn’t replace the money she took from you or ease the heartbreak he caused.

* You live with the consequences of your revenge. When a scorned woman shreds her ex’s clothing or lies to get him fired, she creates her own hell of negatives that will return to her. If a guy sabotages a colleague who did him wrong, he sabotages himself too.

Revenge from the Law of Attraction can take time to happen. OJ’s conviction came 13 years to the day after he was acquitted on the murder charges. Hmmm… coincidence? I think not! He had 13 years to live with what he’d done and get bolder in his arrogance that he’d gotten away with the crime and could get away with others. Thirteen years to feel relief that he didn’t have to go to prison; to think he was invincible; to reinforce his negative energy.

Many folks put it out to the Universe for OJ to get his due. The Law of Attraction found a way to bring OJ’s deed back to him. He got away with murder but will now be punished for a much lesser crime that could put him away permanently. That’s how the Law of Attraction can work.

When OJ got acquitted, people wanted to kill or hurt him. They lamented about how he could get away with such evil. But killing him wouldn’t have given him the punishment he’ll now get. Guilty on all counts could easily keep him in prison for life. Living a hellish existence after 13 years of enjoying his freedom and believing he was in the clear is a fitting punishment.

Success is truly the best revenge for you to get. Let the Law of Attraction do the “dirty work” for you. Next time someone does you wrong:

* Express how you feel about it if that’s possible. Don’t yell or be nasty. Smiling will dig the point in more than an emotional response. Just let them know how you feel—once.

* Put the revenge into God’s hands. Ask for Him to bring the action back to the person in the most appropriate way at the most appropriate time. Two people have stiffed me on a money for seminar fees or consulting with rubber checks. I can honestly say I rest assured they’ve gotten theirs. Both no longer have a business website. And I’m sure they’ve been ripped off by others because of what they did to me. Meanwhile, my conscience is clear and my good reputation attracts lots of other clients.

* Tell the person you’ve put it into God’s hands and won’t bother them about it again. I love to just smile and express my confidence about the person getting what ‘s coming. A few times people have bounced a check for a book they bought. If they don’t replace it after my asking a few times, I’ll just tell them if they’re okay with putting the bad karma on their music career to save 20 bucks and the bank fee, I wish them good luck. They always send a money order.

* Be patient and move on. Don’t watch for it. Knowing it will happen is enough. Dwelling on it hurts you. Trusting it will happen and letting it go will allow the Law of Attraction to work its magic. Just know it will come at the perfect time. Happy 13-year anniversary OJ!

* Forgive the person in your heart. Having that positive spirit will attract other good opportunities to you that will make up for it. Somehow it all works out when you let it!

I’ve never regretted not doing more to get even with someone. Nicole Brown Simpson’s and Ron Goldman’s families may feel more satisfaction from this ruling than from winning the civil suit and getting little from OJ. Let the Law of Attraction assist you next time. Truly convince yourself that the Universe will deal out appropriate revenge for whatever you’re angry about. I feel more powerful than ever know I can let the Law of Attraction take care of revenge for me. And I know it will be a better rev
enge than I could deal up. ?