Darwin at the Mountains of Madness: Evolution & the Occult 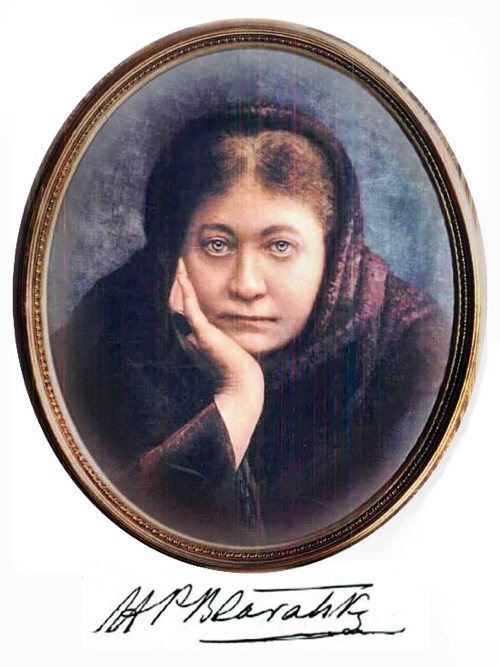 Of all the regrettable cultural forces that Darwinism helped unleash, perhaps the most surprising and seemingly unlikely is its role in sparking the creation of modern occultism. Charles Darwin himself could not have been less interested in the topic. But no attempt to assess the scope of his legacy can properly leave out the muse-like role his theory played in the thinking of Madame H.P. Blavatsky (1831-1891), who in turn was largely responsible for setting the agenda for modern occult interests, including the cult of Aryanism which bore its own poisonous fruit in Nazi Germany.
Readers of this blog will know well by now my view that Darwin’s materialist account of life’s history stands radically opposed to the worldview of the Hebrew Bible. Yet it always has to be repeated at the beginning of a discussion like this that the purpose is not to blame Darwin but merely to explore the largely unintended consequences of his idea. The disclaimer having been made, meet Helena Petrovna Blavatsky, a rotund Russian fabulist of noble birth who later became an American citizen and, after years in India, died in London. Her books, Isis Unveiled and The Secret Doctrine, were tremendously influential and, if less well known today, continue to influence ideas beyond the far edge of respectability — ideas that, however, are no less popular for being weird.
The incredibly popular late-night radio show Coast to Coast AM had on Blavatsky expert Michael Gomes last summer. He clarified the genealogy of some of the rather interesting ideas that preoccupy the show’s 3 million plus listeners. Things like the sunken continents of Lemuria and Atlantis, lost civilizations seeded by wandering white-skinned wise men of old, the “sixth sense” — such themes of contemporary esotericism go back to Blavatsky’s popularizing treatment of them. Not that she invented Atlantis, for example, but the modern esoteric fascination with such matters can be traced back to her influence. She claimed to have learned secret wisdom on a visit to the mountain kingdom of Tibet that she likely never, in fact, took, in a lamasery from the Great White Brotherhood of Masters, or Mahatmas.
What’s interesting about her writing is that she was obsessed with Darwin and mentions him by name frequently — sometimes to argue against him, just as often to claim that evolution was well known long ago to bearers of her secret knowledge. Much of The Secret Doctrine (1888), for example, is given over to her retelling of evolution but as if reflected in a funhouse mirror. So instead of people descending from ape-like creatures, apes descend from people. Evolutionary forces governed a competition among ancient now lost peoples, with Aryans having emerged as the current favored race.
As we learn from her, this was all well known to masters of secret Hindu and other lore. Typically, she writes in Isis Unveiled (1877),

[T]he Brahman-pundits, and the Tanaim — the scientists and philosophers of the pre-Christian epochs — speculated on the creation and development of the world quite in a Darwinian way, both anticipating him and his school in the natural selection of species, gradual development, and transformation.

She wasn’t a racist, nor was she an anti-Semite. Her definition of “Aryan” even included Jews! But it’s easy to see an early adumbration of Nazi themes. Her personal seal, printed on her book covers, is topped by the swastika, an ancient Indian symbol of good fortune that she also helped to bring to public attention and admiration. Her concept was that the people of Atlantis mostly perished, but some survived and linked up with Aryans who were in Tibet at the time, passing along secret knowledge.
It sounds ridiculous but people took it seriously at the time because of the pseudo-scientific, pseudo-Darwinian and pseudo-scholarly gloss that’s everywhere in her work. Theosophy, as she called her view, achieved cult-like influence over lots of educated people, and with notable success in Germany where the Aryan theme was popular. SS-chief Heinrich Himmler, an admirer of “Aryan” Hindu wisdom who carried a book of teachings from the Bhagavad-Gita with him, would later send a Nazi science expedition to Tibet to seek the origins of the Aryan race. The occult Thule Society, with its cult of Aryanism, inherited some of Blavatsky’s vision. Thule in turn connects to Hitler by way of member Dietrich Eckhart, credited as the “spiritual founder” of the Nazi party, to whom Hitler dedicated Mein Kampf on its final page.
No, this is not just my interpretation. It’s given in a number of scholarly and popular works with no axe whatsoever to grind against Darwin. In The Occult Roots of Nazism (New York University Press, 1992), Nicholas Goodrick-Clarke ties together the various threads of Aryan race cultism under the term “Ariosophy” and summarizes, “The central importance of ‘Aryan’ racism in Ariosophy, albeit compounded by occult notions deriving from theosophy, may be traced to the racial concerns of Social Darwinism in Germany.”
In Himmler’s Crusade: The Nazi Expedition to Find the Origins of the Aryan Race (Wiley, 2003), Christopher Hale writes of how Darwin,

who had no interest in the occult, had a powerful impact on its development and was revered by Madame Blavatsky who claimed to have translated his works in Russian while in Africa. Not true, but Darwin’s ideas which had so dismayed the Church when they first appeared, were rapidly absorbed by occult thinkers.” Hale notes how Hitler’s confidants, Nazi occultists Heinrich Himmler and Rudolf Hess, combined an “interest in Social Darwinism” with their “bogus history of an Aryan Master Race.”

Taking her cue from Darwin, she popularized the notion of a spiritual struggle between various “races,” and of the inherent superiority of the “Aryan” race, hypothetically the latest in the line of spiritual evolution….The rationale behind many later Nazi projects can be traced back — through the writing of von List, von Sebottendorff, and von Liebenfels — to ideas popularized by Blavatsky.

He crystallizes the point: “Human evolution is Darwin’s engine, one Blavatsky would ride to the end of the line. In a sense, Origin of Species and The Descent of Man launched the craziness of the 20th century.”

By decapitating — so he thought — any rational case for belief in a divine or any other designer, Darwin created a gaping wound at the center of the Western soul. Something had to come along and fill that hole and it had to be, so to speak, Darwin-shaped. It had to speak in evolutionary terms, about races and competition. Madame Blavatsky happened to be the person who came up with an influential modern Darwinian myth that filled that role, disastrously.
read next post
Why Women Will Never Be Orthodox Rabbis
archives most recent
More from Beliefnet and our partners
previous posts