With Chanukah Approaching, My Knee Hurts 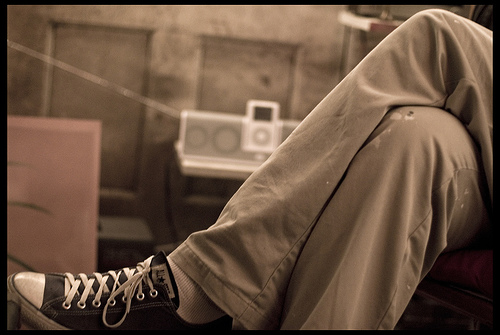 Because of my sore knee, it follows that there this is no God.

You think I’m kidding but this line of reasoning is commonly heard from devotees of evangelizing atheism like Richard Dawkins. It’s the argument from seemingly poor, botched, or suboptimal design. Yet the Hebrew Bible alerts us early on that creation is afflicted with a “lack” or “deficiency” (chesron), as Jewish philosophy terms it. The Maharal, whom we talked about recently, discussed this theme in his book on Chanukah, Ner Mitzvah, which is why I mention it now. Chanukah arrives this coming Friday night.
The human knee appears to be ill-suited to its task, hence the prevalence of knee pain, similar to that of back pain, and so on. I’ve had trouble from this recurrent minor soreness, brought on by running. So here’s a website devoted to cataloguing instances of apparently faulty designs like my knee that, so goes the argument, a creator would not allow in his creatures.
That is a theological argument, not a scientific one, based on the premise that Dawkins & Co. know what a God would or wouldn’t do if that God existed which he does not. As Dawkins writes in The Greatest Show on Earth, regarding the extravagantly lengthy and circuitous recurrent laryngeal nerve of the giraffe, “Any intelligent designer would have hived off the laryngeal nerve on its way down, replacing a journey of many meters by one of a few centimeters.” Atheists think they’ve discovered a devastating “Ah hah! Gotcha!” sort of a response to religious believers who, it’s assumed, never realized that nature has a certain painful lack of perfection built into it.
Yet writing in the 16th century, the Maharal finds evidence that the deficiency was not only intended and foreseen by God but is a necessary feature of creation, alluded to in the opening verses of Genesis:

In the beginning God created the heaven and the earth, and the earth was without form, and void; and darkness was upon the face of the deep.

One particular “deficiency” that was tinkered with and corrected is the initial solitude of Adam, the first man, depicted as lonely and single:

And the Lord God said, It is not good that the man should be alone; I will make him an help meet for him.

Read that again carefully. God’s creative activity produced something that was “not good.” That it was fixed later through the creation of Eve doesn’t take away from the startling admission by the Bible itself. Dawkins again: “This pattern of major design flaws, compensated for by subsequent tinkering, is exactly what we should not expect if there really were a designer at work.” The Hebrew Bible’s reply would be, “Oh really?”
In the context of Chanukah, with its theme of the wicked Greek kingdom’s oppression of the Jews in their land and the subsequent civil war pitting religiously loyal Jews against secularist Greek-loving Jews, the theme emerges a little differently.
In the Biblical scheme of history, four kingdoms arose and sequentially divested God’s presence in the world of some of its splendor. Each did so by depriving the Jews of sovereignty in their land, where Israel was intended to carry out her mission to the fullest extent possible. One kingdom was Greece. Another was Rome, in whose exilic shadow we still live. The Maharal finds all four alluded to in the second verse in Genesis. It was foreseen, no matter of chance, a part of the pattern that God knew full well would unfold.
Woven into creation from the start was a very painful thread of “deficiency,” playing out on the historical stage. Why not, too, in nature?
It could hardly be otherwise. If a trivial example like a sore knee is “bad design” and a point scored for atheism, then any trivial lack of perfection in created reality is enough to trigger the atheist response. Any evil in nature, any suffering. Over Shabbat, a dentist friend of our family was at our home for lunch and he told about how one of his patients was up hiking on a mountain trail near Seattle and got eaten by cougar.
Pulled off the trail and eaten. They found her bones two years later.
The world can be rough and it’s obviously not all a matter of people freely choosing evil. The verse in Isaiah (45:7) says it directly:

I form the light, and create darkness: I make peace, and create evil: I the Lord do all these things.

My apologies if this upsets any delicate sensibilities, but consider the alternative. A world without evil. What would that be like? It would be the perfect hamster cage or turtle terrarium, where all our needs are provided, there are no predators, no contagious disease, no confusion, no loneliness, no sin, no particular purpose, no growth, just spinning aimlessly on our exercise wheel or swimming idly in our calm, algaed paddling pool.

For Dawkins & Co., it’s either the turtle terrarium or a Godless universe. What an absurd false dilemma. For the God he doesn’t believe in, however, it’s easy to see why the turtle alternative would hold little charm, hardly enough to justify creating a world in the first place. Creatures that could never grow or change spiritually because they were unchallenged and therefore totally uninteresting? What’s the point? Once we admit that some lack, or anyway so we perceive it, in creation was inevitable if there was to be a creation, what extent of deficiency was going to be enough? Maybe a little, maybe a lot. You will have to ask God when you meet him.
I’m taking it for granted that part of His purpose in creating us was to relate to us, once humanity has matured to a point where that’s really possible. Who would want to have a relationship with a hamster?
read next post
Finding Your Own Enchantment in Torah
archives most recent
More from Beliefnet and our partners
previous posts