Dr. Josef Mengele, Angel of Death and “Devotee of Darwin” 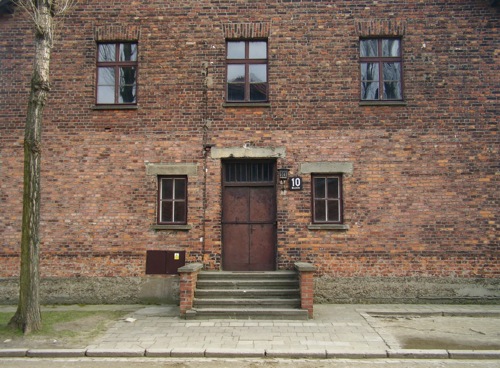 Try to imagine being operated on without anesthesia. A kidney is removed and then, while you are still fully awake, the surgeon displays it to you for your consideration in his hand. Sounds like a very bad nightmare but this is the kind of thing Dr. Josef Mengele did routinely with patients at Auschwitz. What would inspire a human being to such devilry? What influence, perhaps early in life, might have nudged him off the course of what could have otherwise been a conventional medical career?
Darwinists will throw up their hands in disgust at my question, because they think they know where I am taking this. But it’s not I who am taking it anywhere, but Mengele’s biographers.
What prompted me to ask in the first place, however, is a horrendous interview in Der Spiegel with a survivor of Mengele’s experimentation, a Greek-born Jew named Yitzhak Ganon, now living near Tel Aviv. Till very recently, when he had a heart attack, Mr. Ganon had strictly avoided doctors of all kinds. And no wonder about that. The magazine recounts:

Ganon was taken to the Auschwitz-Birkenau hospital, where Josef Mengele, the so-called “Angel of Death,” conducted grisly experiments on Jewish prisoners.

Ganon had to lie down on a table and was tied down. Without any anesthetics, Mengele cut him open and removed his kidney. “I saw the kidney pulsing in his hand and cried like a crazy man,” Ganon says. “I screamed the ‘Shema Yisrael.’ I begged for death, to stop the suffering.”

After the “operation,” he had to work in the Auschwitz sewing room without painkillers. Among other things, he had to clean bloody medical instruments. Once, he had to spend the whole night in a bath of ice-cold water because Mengele wanted to “test” his lung function. Altogether, Ganon spent six and a half months in the concentration camp’s hospital.

The hospital building is pictured above.
In Mengele: The Complete Story, Gerald L. Posner and John Ware ask the same question I did:

Precisely what corrupted Mengele’s eager young mind is hard to pin down. Probably it was a combination of the political climate and that his real interest in genetics and evolution happened to coincide with the developing concept that some human beings afflicted by disorders were unfit to reproduce, even to live. Perhaps the real catalyst in this lethal brew was that Mengele, first at Munich and later at Frankfurt, studied under the leading exponents of this “unworthy life” theory. His consummate ambition was to succeed in this fashionable new field of evolutionary research.

Medicine at German universities was in any case more complementary to Mengele’s real interest in evolution, since it was taught in accordance with the guidelines of the social Darwinist theory that Hitler and a growing number of German academics found so attractive.

One of the earliest influence on the student doctor was Dr. Ernst Rudin, whose lectures Mengele regularly attended….Rudin was a leading proponent of the theory that doctors should destroy “life devoid of value.” Rudin himself was one of the architects of Hitler’s compulsory sterilization laws, which were enacted in July 1933.

As Richard Weikart notes in Hitler’s Ethic: The Nazi Pursuit of Evolutionary Progress, Rudin co-wrote the official commentary on the 1933 legislation, which proved to be a dress rehearsal for the Holocaust. In the commentary, Mengele’s teacher and his co-authors lamented that with “inferior” people at the present time,

…the reduced adaptation, as Darwin expressed it, does not lead to eradication, but rather the effect of natural selection has been transformed through civilization into its opposite and thus to contraselection.

This was a point directly borrowed from Darwin’s own notorious observation to the same effect in The Descent of Man. The purpose that evolutionary eugenics advocates sought was to counter the deleterious influence of civilization, restoring the pristine workings of natural selection. That way, the “inferior” either wouldn’t be born in the first place or, failing that, could be otherwise disposed of.
In their book on Mengele’s experiments on twins, Children of the Flames: Dr. Josef Mengele and the Untold Story of the Twins of Auschwitz, Lucette Matalon Lagnado and Sheila Cohn Dekel refer to Mengele as a “devotee of Darwin.” They write:

The messianic quality of social Darwinism seems to have appealed to the young Mengele. His writings suggest that he was especially struck by their use of the phrase “the fate of mankind.” From his youthful encounter with their distorted ideals, to his old age, a weary and broken exile, Mengele would continue to feel a personal allegiance to the social Darwinists. At the university, the question of the “biological quality of mankind” may have been esoteric to most of Mengele’s classmates. But for him, it was apparently a clarion call.

Indeed, the ideas Mengele was so anxiously absorbing in his studies were precisely the ones that would propel him down the road to Auschwitz.

I’m tired of having to explain that an idea’s having been put to an evil use, even if that occurred time after time for more than a century and a half, doesn’t by itself make the idea a false description of reality. But if that is what happened, as it is here, it’s an awfully good reason to think twice and carefully, for yourself, about the evidence said to underlie claims made on behalf of the idea.
One thing’s for sure. If Mengele in his university studies had instead been a devotee of the Bible, that fact would be well known to everyone with an interest in the Holocaust and in one of its most supremely notorious figures. In fact, Dr. Mengele’s devotion to Darwin’s scientific and social teachings has been kept strangely quiet. And why do you think that is?
read next post
Hitler's Pope? Not Exactly
archives most recent
More from Beliefnet and our partners
previous posts