Peace for Our Time! With Dr. Collins, How Far Is Too Far? 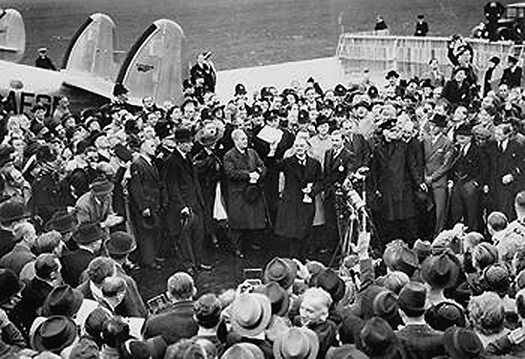 When it comes to capitulating to secularism, how far is too far? I’m serious. This is not a rhetorical question.
Washington Post columnist Michael Gerson, an Evangelical Christian and former Bush speechwriter, writes glowingly of Obama’s Francis Collins nomination for NIH:

Collins’s appointment says something good about the maturity of modern evangelicalism, which is starting to abandon some of its least productive debates with modernity. Criticisms of evolution, rooted in 19th-century controversies, have done little more than set up religious young people for entirely unnecessary crises of faith as they encounter scientific knowledge. In the running conflict of modern biology and evangelicalism, Collins is a peacemaker.

So Collins, a very public Evangelical Christian, concedes almost everything to Darwinism, and that is an example of “maturity” and “peacemaking.” Collins’s Darwinism means radically rethinking the traditional of idea of human beings having been created in God’s image, as he freely admits. Not coincidentally, he capitulates to abortion culture, in shocking ways, and this too is presumably an achievement in “peacemaking.” Neville Chamberlain would surely agree.
Yes, Obama was always going to nominate someone pro-choice (and pro-Darwin, if the point ever came up) to the National Institutes of Health. What’s so insidious here is that he selected an Evangelical Christian, a self-identified traditionalist, who advocates these views. Collins’s example then becomes a tool to manipulate other traditional believers, whether Christian or Jewish. If Dr. Collins is ready to concede, why not you? Aren’t you socially embarrassed to be revealed as some kind of fundamentalist?
(UPDATE: A reader sagely urges that I emphasize: The important meaning of Darwinism is that natural selection, an unguided material process, accounts for all life’s diversity and complexity — a doctrine that is a) scientifically unconvincing and b) would make a hopeless mash of Judaism. On the other hand, that life has an evolutionary history including billions of years of change — that is unassailable as science and unobjectionable to me as a Jew.)
My question for readers would be this: What’s an example of a moral or theological line that, if secularism crossed it, you as a religious believer would feel compelled to say: “That violates the core of my faith. If accepted, it would make an incoherent mash of my most cherished beliefs. So I need to look at the issue more closely for myself and not simply accept on trust what I’m told by the prestige media or academia.”
Keep reading after the jump.
I don’t mean if secularists advocated, oh, expelling or liquidating a portion of the adult population as non-humans. That would be too easy. (So you would think — it wasn’t for Chamberlain.) This question is not a no brainer, nor is it an invitation to argue the merits of intelligent design versus Darwinism. Rather, where for you is the edge of the envelope?
Maimonides, learned in the science and philosophy of his own time, wrote in the Guide of the Perplexed (2:25) that while Scripture can be reread in light of science up to a point, this can’t be done without limit. There comes a point where the intellectually, spiritually, and scientifically serious believer is forced to make a choice. In the Middle Ages, the issue was the Aristotelian doctrine that the universe is eternal and has no beginning. That was the scientific cutting edge back then (since proven wrong by the Big Bang). Maimonides concluded:

If the philosophers would succeed in demonstrating eternity as Aristotle understands it, the Torah as a whole would become void, and a shift to other opinions would take place. I have thus explained to you that everything is bound up with this problem.

If being created in God’s image, and the sacredness of life even in the womb, do not represent edges of the envelope for you, then what does?
I ask this as a Jew who has written that historically, Christianity originated when some Jews couldn’t rightly answer the question for themselves: How far is too far?
I would love it if someone were to candidly question Francis Collins himself. He has been challenged to a public dialogue on these and other issues. Marvin Olasky of World Magazine has offered to host an event, matching Collins up against Stephen Meyer. Perhaps such questions will come up at his confirmation hearing.

read next post
Boston Globe, Den of Theocracy!
archives most recent
More from Beliefnet and our partners
previous posts