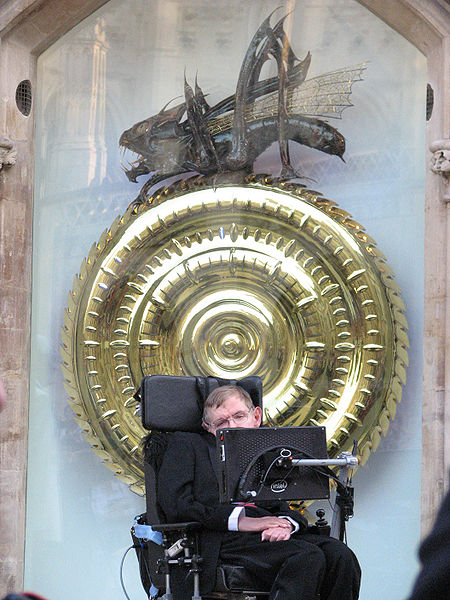 Stephen Hawking, theoretical physicist and sometimes hailed as the world’s smartest man, is reported “very ill” and as having been rushed to the hospital. Newspaper writers are working on obituaries.
An interesting sidelight, that one hopes will not prove poignant too, is the little reported challenge Dr. Hawking makes in his work to a most fundamental tenet in any Biblically based religion — that the universe had a beginning. If it did not have a beginning, that pretty much rules out a Deity along the lines suggested in Genesis 1:1: “In the beginning God created the heavens and the earth.”
There were heated debates about this in the Middle Ages, going back to a difference in view between Plato and Aristotle. Strangely, no less an institution than the Vatican gave a forum to Hawking on the subject this fall. I reported and reflected on the irony in a Forward column.
Excerpt:

The great psychologist William James…observed that most of us arrive at our opinions — whether on religion, politics or science — based not on a judicious weighing of evidence, but rather on the prestige of the ideas in question. That is, the prestige they confer on us. Even Vatican officials aren’t immune from such human tendencies, and the fact is that, the merits of his theories aside, Stephen Hawking is a very prestigious scientist. As I have come to realize from countless frustrating personal interactions, lots of religious folks feel a social need to affirm certain ideas, including scientific ones, outside the realm of their expertise. With their personal prestige at stake, they will not be dissuaded.

As an admirer of the Catholic Church, I’m disappointed to say that, in the Vatican’s strange embrace of Hawking, we can observe that same depressing dynamic at work.

All of which notwithstanding, this blog wishes Dr. Hawking a refuah shleimah, a speedy recovery.
read next post
Remembering Adam & Eve's Son Abel -- on Yom HaShoah?
archives most recent
More from Beliefnet and our partners
previous posts