Darwin’s Tree of Death: My Reply to Readers 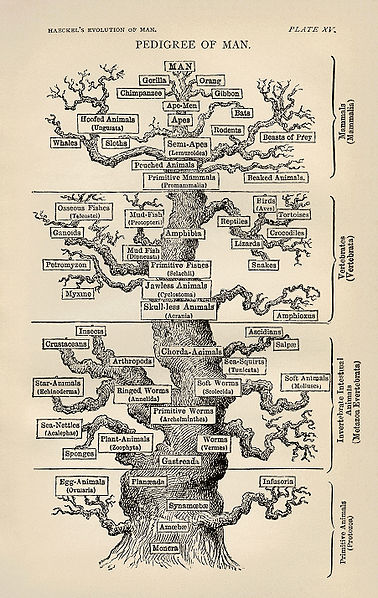 Responding to my post on the Columbine shooting and the social consequences of Darwinism, some objecting readers argued that the Bible, after all, has also inspired evil acts. Which is true, of course, but misses the point. Biblical faith has been used for good and abused for evil. That’s why we can justifiably speak of its being “abused” — because it has this other record of goodness.
The ideas that comprise Darwin’s worldview, set forth in his books, have justified social movements for evil — racism, colonialism, eugenics, etc. — but none, that I’m aware of, for good. If anyone can think of counterexamples, please let me know.
Bottom line: Ideas have consequences.
Now does that mean that the Darwinian idea is false as a scientific description of how life developed? No, obviously it doesn’t mean that. As I’ve argued all along, Darwinism’s social record is simply and nothing more than a good reason to take a second look at the science behind it. And that’s what uninformed people like Charles Johnson at Little Green Footballs adamantly refuse to do.
So when bad guys have used Darwin to justify racism and other evils, were they abusing his thought? Consider Darwin himself on “lower” peoples.
The “extermination” (a favorite word of Darwin in his writings) of failed races, whether animal or human, is a great theme in Darwin’s books and a key feature in the advance of the evolutionary process as he conceived it. The elimination of human groups was a phenomenon parallel to that of animal groups: “The New Zealander seems conscious of this parallelism,” Darwin reflected in the Descent of Man, “for he compares his future fate with that of the native rat now almost exterminated by the European rat.”
Reflecting on the terror that Europeans once felt about the rise of the Turkish nation, Darwin celebrated, in a letter to the Irish philosopher William Graham, “Looking to the world at no very distant date, what an endless number of the lower races will have been eliminated by the higher civilized races throughout the world.”
He saw advantages to the unapologetic way barbarians went about the labor of killing off the weak.
Darwin entertained no faith in the equality of races. In the Descent he wrote that the “mental characteristics” of the human races, including the “light-hearted, talkative negroes,” are “very distinct; chiefly as it would appear in their emotional, but partly in their intellectual faculties.”
The implications of this theory were plain, and he spelled them out in his scientific writing. Inferior races and peoples were simply lower down on the tree of life – they were losers in the struggle for existence and would, in the course of nature’s normal way, be eliminated.
Darwin observed that “when civilized nations come into contact with barbarians, the struggle is short.” The problem came if the dynamic of struggle was somehow impeded. This would be “highly injurious to the race of man.” There was little hope that backward peoples would somehow advance to equality with their betters.
A difference between Darwinian and pre-Darwinian racism is that the pre-Darwinian variety regarded “barbarians” not as permanently inferior quasi-animals but as something more like children. Animals remain animals. Children, at least, will naturally grow up and mature.
The late Stephen Jay Gould, a modern scientific champion of Darwinism, admitted that “Biological arguments for racism…increased by orders of magnitude following the acceptance of evolutionary theory.”
But please understand this is just the absolute tip of the iceberg. I’ve written elsewhere lots and lots on this theme. For more information on Darwin in America, read my colleague John West’s thorough and impeccably documented Darwin Day in America. For Darwin in Europe, read Richard Weikart’s startling From Darwin to Hitler.
read next post
Is Dan Brown Good for the Jews?
archives most recent
More from Beliefnet and our partners
previous posts