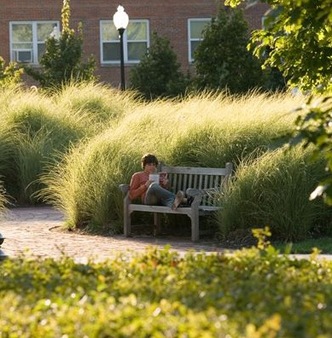 What do you see here? (beside the beautiful “Morning Light” grasses at NPU)

Beloit, Wis. – Born when Ross Perot was warning about a giant sucking sound and Bill Clinton was apologizing for pain in his marriage, members of this fall’s entering college class of 2014 have emerged as a post-email generation for whom the digital world is routine and technology is just too slow.

Each August since 1998, Beloit College has released the Beloit College Mindset List. It provides a look at the cultural touchstones that shape the lives of students entering college this fall. The creation of Beloit’s Keefer Professor of the Humanities Tom McBride and former Public Affairs Director Ron Nief, it was originally created as a reminder to faculty to be aware of dated references, and quickly became a catalog of the rapidly changing worldview of each new generation. The Mindset List website at www.beloit.edu/mindset, the Mediasite webcast and its Facebook page receive more than 400,000 hits annually.

The class of 2014 has never found Korean-made cars unusual on the Interstate and five hundred cable channels, of which they will watch a handful, have always been the norm. Since “digital” has always been in the cultural DNA, they’ve never written in cursive and with cell phones to tell them the time, there is no need for a wrist watch. Dirty Harry (who’s that?) is to them a great Hollywood director. The America they have inherited is one of soaring American trade and budget deficits; Russia has presumably never aimed nukes at the United States and China has always posed an economic threat.

Nonetheless, they plan to enjoy college. The males among them are likely to be a minority. They will be armed with iPhones and BlackBerries, on which making a phone call will be only one of many, many functions they will perform. They will now be awash with a computerized technology that will not distinguish information and knowledge. So it will be up to their professors to help them.  A generation accustomed to instant access will need to acquire the patience of scholarship. They will discover how to research information in books and journals and not just on-line. Their professors, who might be tempted to think that they are hip enough and therefore ready and relevant to teach the new generation, might remember that Kurt Cobain is now on the classic oldies station. The college class of 2014 reminds us, once again, that a generation comes and goes in the blink of our eyes, which are, like the rest of us, getting older and older.

The Beloit College Mindset List for the Class of 2014

Most students entering college for the first time this fall–the Class of 2014–were born in 1992.

1. Few in the class know how to write in cursive.

2. Email is just too slow, and they seldom if ever use snail mail.

3. “Go West, Young College Grad” has always implied “and don’t stop until you get to Asia…and learn Chinese along the way.”

4. Al Gore has always been animated.

5. Los Angelinos have always been trying to get along.

6. Buffy has always been meeting her obligations to hunt down Lothos and the other blood-suckers at Hemery High.

8. With increasing numbers of ramps, Braille signs, and handicapped parking spaces, the world has always been trying harder to accommodate people with disabilities.

9. Had it remained operational, the villainous computer HAL could be their college classmate this fall, but they have a better chance of running into Miley Cyrus’s folks on Parents’ Weekend.

10. A quarter of the class has at least one immigrant parent, and the immigration debate is not a big priority…unless it involves “real” aliens from another planet.

12. Clint Eastwood is better known as a sensitive director than as Dirty Harry.

13. Parents and teachers feared that Beavis and Butt-head might be the voice of a lost generation.

14. Doctor Kevorkian has never been licensed to practice medicine.

15. Colorful lapel ribbons have always been worn to indicate support for a cause.

16. Korean cars have always been a staple on American highways.

19. They never twisted the coiled handset wire aimlessly around their wrists while chatting on the phone.

20. DNA fingerprinting and maps of the human genome have always existed.

21. Woody Allen, whose heart has wanted what it wanted, has always been with Soon-Yi Previn.

23. Leasing has always allowed the folks to upgrade their tastes in cars.

24. “Cop Killer” by rapper Ice-T has never been available on a recording.

25. Leno and Letterman have always been trading insults on opposing networks.

26. Unless they found one in their grandparents’ closet, they have never seen a carousel of Kodachrome slides.

28. They’ve never recognized that pointing to their wrists was a request for the time of day.

29. Reggie Jackson has always been enshrined in Cooperstown.

30. “Viewer Discretion” has always been an available warning on TV shows.

31. The first computer they probably touched was an Apple II; it is now in a museum.

33. Second-hand smoke has always been an official carcinogen.

36. Adhesive strips have always been available in varying skin tones.

37. Whatever their parents may have thought about the year they were born, Queen Elizabeth declared it an “Annus Horribilis.”

38. Bud Selig has always been the Commissioner of Major League Baseball.

39. Pizza jockeys from Domino’s have never killed themselves to get your pizza there in under 30 minutes.

40. There have always been HIV positive athletes in the Olympics.

42. Potato has always ended in an “e” in New Jersey per vice presidential edict.

43. Russians and Americans have always been living together in space.

44. The dominance of television news by the three networks passed while they were still in their cribs.

45. They have always had a chance to do community service with local and federal programs to earn money for college.

46. Nirvana is on the classic oldies station.

47. Children have always been trying to divorce their parents.

48. Someone has always gotten married in space.

49. While they were babbling in strollers, there was already a female Poet Laureate of the United States.

50. Toothpaste tubes have always stood up on their caps.

51.  Food has always been irradiated.

52. There have always been women priests in the Anglican Church.

54. The historic bridge at Mostar in Bosnia has always been a copy.

56. They may have assumed that parents’ complaints about Black Monday had to do with punk rockers from L.A., not Wall Street.

58. Beethoven has always been a dog.

59. By the time their folks might have noticed Coca Cola’s new Tab Clear, it was gone.

60. Walmart has never sold handguns over the counter in the lower 48.

61. Presidential appointees have always been required to be more precise about paying their nannies’ withholding tax, or else.

62. Having hundreds of cable channels but nothing to watch has always been routine.

63. Their parents’ favorite TV sitcoms have always been showing up as movies.

64. The U.S, Canada, and Mexico have always agreed to trade freely.

65. They first met Michelangelo when he was just a computer virus.

66. Galileo is forgiven and welcome back into the Roman Catholic Church.

67. Ruth Bader Ginsburg has always sat on the Supreme Court.

68. They have never worried about a Russian missile strike on the U.S.

70. The artist formerly known as Snoop Doggy Dogg has always been rapping.

71. The nation has never approved of the job Congress is doing.

72. One way or another, “It’s the economy, stupid” and always has been.

74. They’ve always been able to blast off with the Sci-Fi Channel.

75. Honda has always been a major competitor on Memorial Day at Indianapolis.
&
nbsp;