I’m a bit late on jotting down some ideas about our wonderful trip to (flower-filled) Korea. I was invited to speak to the Faculty and Staff of Seoul Foreign School in the Sodaemun-Gu area of Seoul. It our first trip to the East and we hope it is not our last: loved it. 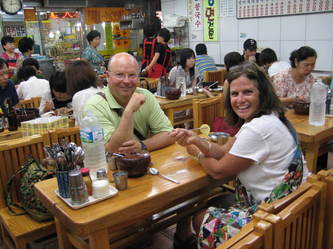 John and Alice Engstrom were our hosts. Kris took a shot of Alice and me at the table where we were eating Bibimbap at the big market in Seoul. They were not only great hosts, but they love many things we love: like Italy and Dan Taylor’s writings and grandchildren and sports. I could go on with names and I’ll avoid that, but let me give you a sample of the people teaching at SFS: a young couple who had just finished a stint teaching in Tarsus (Turkey), a middle-aged couple who had just arrived from China where they had taught three years, a couple from Wisconsin who had taught in Africa and Bolivia and now were in Seoul … Wanderlust indeed.

One day was for a Jesus Creed Retreat, and since they had all read Jesus Creed, I worked up some new stuff on how the Jesus Creed meshes with education — and not just for college teaching. It was a good day, good questions, and we got to spend time with the teachers at SFS. Education is about loving students in the direction of wisdom — that was the gist of my talk.
On the second night we were there, and many of us were still under some form of jet lag, we went to a theater near the City Hall where we saw a history of folk dancing gathered around a love story. (It was all in Korean but the singing and dancing was great.) On another night we saw Nanta, and I don’t know how to describe it but it was sure fun: a kitchen and cutting boards and knives and dancers version of Stomp and Blue Man Group. Alice arranged it so I would be the one they asked to come to the stage for audience participation. (Nothing to say.)

We enjoyed Seoul, too. We had tea in a really swanky part of Seoul, saw the market — wow, was that place busy. Alice was getting ready for a big event at the home, which meant getting some flowers, so Kris took a shot of the flower shop — opening picture in this post.
Now a fun story. You may know I like to play golf but you may not know that as a rule I don’t play golf when I speak in places. The inside story there is I don’t like to play without my own clubs. Well, John coaxed me into playing a really cool course in Incheon, near the airport. I played terribly but it was a one-of-a-kind experience. First, I’ve never seen so many color-coordinated outfits with bags. The Koreans are much more serious about golf than Americans (that I play with). And the whole event was a whole event: not just golf but spa and all. What a hoot. 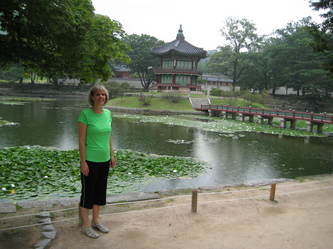 On the last day we visited the massive Palace complex, and it went on and on and on. It is the traditional ruling class of the Korean peninsula and we were so impressed with the buildings, the painting, the order and beauty of it all … here’s a pic of Kris in the back of the complex near a pond and gazebo.