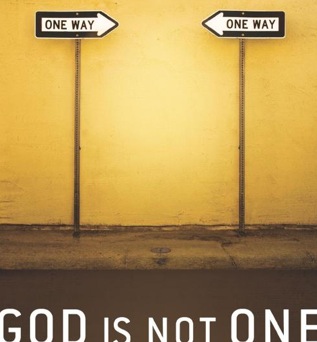 A pastor once said to me that Christianity, Judaism, and Islam believe in the same God but just worship him differently. I said two things back: (1) Not true, for no Jew or Muslim believes in or worships God as Trinity, and (2) just try getting an ordinary Christian, Jew or Muslim to say they think that we all have the same God.

I have believed for a long time that touchstones are to be used but the only honest way to dialogue about our faiths is to tell the truth about our faith and tell the truth of what we think of the other faith, and then to listen to the other person say the same to us and of our faith. With love from first to last, but with the truth of love and love for the truth. The worst thing we can do is to pretend we are all really saying the same thing.
But the pastor’s comment is common and widespread. For instance, Swami Sivananda said, “The fundamentals or essentials of all religions are the same. There is difference only in the non-essentials.” To which Stephen Prothero, author of God Is Not One: The Eight Rival Religions That Run the World–and Why Their Differences Matter

, says both bitingly and truthfully: “This is a lovely sentiment but it is dangerous, disrespectul, and untrue.”
I see this sentiment to which Prothero addresses himself in his new book to be a religious colonialism. It is a way of incorporating the beliefs of another into what one person believes and clarifying, for the truly enlightened, that after all these religions are all variations on a theme. Once you get the theme, and one must be exceedingly broad-minded to grasp it, you can see that we differ only on particularities. Prothero’s book is designed to rebut the whole approach of religious colonialism. Here are a few of his opening statements:

“God is not one. Faith in the unity of religions is just that — faith.” It’s “an act of the hyperactive imagination.”
Karl Rahner once spoke of others in other religions as being anonymous Christians. Hans Kung answered back: “It would be impossible to find anywhere in the world a sincere Jew, Muslim or atheist who not regard the assertion that he is an ‘anonymous Christian’ as presumptuous.”
Yes, Prothero says, the world’s religions share one thing: they all believe there is a problem or something’s wrong. But from that point on they differ, and often dramatically. The solutions show how much they differ. They are not all climbing the same mountain but they are on different mountains.
This book surveys the world’s religions. Join us. 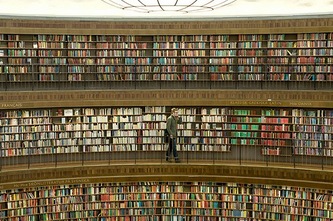 Do We Need Libraries?
archives most recent
More from Beliefnet and our partners
previous posts