Imagine a world where the worst of offenders or the least conforming or the most offensive — in other words, sinners — are restored to the table of fellowship.

That’s what Jesus exhorts the Pharisees and legal experts to imagine when he tells the parable of the “prodigal son” (which you can read after the jump).
Again, the Pharisees and legal experts are offended by Jesus’ behavior of welcoming tax collectors and sinners to the table. Jesus’ response is to tell stories, and by those stories he ushers everyone into a storied world — an imagined world — where a different order obtains.
In that world, Jesus says, we can imagine a man with two sons … the younger one a corrupt character who wipes out his dad’s inheritance and disrespects his father grievously and publicly, squanders it away in the Diaspora, and ends up — shockingly and comedically if not tragically — feeding pigs. But the kid comes to his senses and commits to going back home and telling his father he’s sorry and begging for mercy — just enough mercy to work on the outskirts of the estate.
We wait for Jesus’ story of how the father responds because we know that world was not fond of rebellious wandering sons, but the father’s response mirrors Jesus’ table practices: he throws a huge party and gives the son everything and more, so much so the son gains his father’s status.
The story’s not over because the kingdom world Jesus imagines is not ideal or perfect: we are asked to imagine what the older son’s response was. And he, like the Pharisees and legal experts, grouses over the father’s behavior. We’ve come full circle, then.
But the father’s response, once again, surprises: instead of reprimand, the father shares his commitment, too, with the older son and reminds him in covenant language of his covenant love and faithfulness. Covenant people, he says, need to celebrate when the sinner repents and rejoins the table.
If God welcomes them to the table, God’s people must as well!
What the Pharisees and legal experts need most is a renewed imagination, an imagination that can see what God can do in healing people. Imagine a world, Jesus wants us to see, where sinners are restored to God and to the community.

15:25 “Now his older son was in the field. As he came and approached the house, he heard music and dancing. 15:26 So he called one of the slaves and asked what was happening. 15:27 The slave replied, ‘Your brother has returned, and your father has killed the fattened calf because he got his son back safe and sound.’ 15:28 But the older son became angry and refused to go in. His father came out and appealed to him, 15:29 but he answered his father, ‘Look! These many years I have worked like a slave for you, and I never disobeyed your commands. Yet you never gave me even a goat so that I could celebrate with my friends! 15:30 But when this son of yours came back, who has devoured your assets with prostitutes, you killed the fattened calf for him!’ 15:31 Then the father said to him, ‘Son, you are always with me, and everything that belongs to me is yours. 15:32 It was appropriate to celebrate and be glad, for your brother was dead, and is alive; he was lost and is found.'” 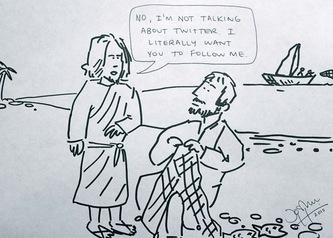