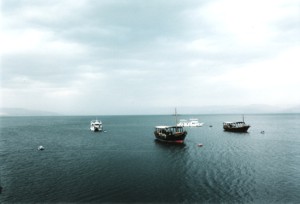 Although I have often interacted here with posts on other blogs, I have not generally paid a great deal of attention to the comments on those other blogs. There was an interesting comment on Peter Enns’s post Jesus and the Sea though, a comment I think worth a response and some consideration and one that relates to many of the discussions we have had here of late. (Picture to the right: Sea of Galilee or Lake Kinneret on a rather calm day.)

I like your writings here on the Bible; they’re the best thing on
Biologos.  But I want to ask you a tough question.  Let me preface it.

Your article here appears to argue a both/and position.  That is, it
appears to treat the events described both as real historical events and
as events with deep symbolic resonance.

In the past, I have seen some theistic evolutionists act, well, kind
of squirmy when such episodes are brought up.  I remember watching one
debate, where people kept asking a Protestant minister who was also a TE
whether he though Jesus actually walked on the water.  Every time the
phrase “walked on the water” was used, the minister corrected people
with “he walked on the SEA”, and went into a learned discourse about
sea-symbolism in the Old Testament.  By the end, no one could tell what
the minister believed about the historicity of the story.

Of course, for the average Joe, if Jesus walked on the sea, he also
walked on the water, so the historical question is the same.  Let me put
it this way.  If we had an undamaged, clear videotape of the incident,
and played it back today, what would we SEE?

I won’t be offended by any reasoned answer, but you can plead the 5th
if you wish.

This post didn’t get many comments, although the conversation continued with several more along the same theme as this one. The issue came up in the comment stream on other later posts as well. It was suggested that there is a negative correlation between taking the position that theistic evolution is the best description of God’s method of creation method and a willingness to believe in the miracles related in scripture, in the Old Testament, and more importantly in the New Testament. TE, it was suggested, starts one on a slippery slope to deny any active work of God. Liberal rationalism here we come. So we ask again the question:

Did Jesus really walk on water?

Well, I am a scientist, someone who certainly takes an evolutionary view of creation, who is skeptical of intelligent design, and yet claims to be an orthodox evangelical Christian … let me take a stab at this.

As a Christian both orthodox and evangelical I affirm the historic creeds – the rule of faith which we have received from the beginning. The Apostle’s creed is a good summary:

I believe in God, the Father Almighty, the Maker of heaven and earth, and in Jesus Christ, His only Son, our Lord:

Who was conceived by the Holy Ghost, born of the virgin Mary, suffered under Pontius Pilate, was crucified, dead, and buried; He descended into hell. The third day He arose again from the dead; He ascended into heaven, and sitteth on the right hand of God the Father Almighty; from thence he shall come to judge the quick and the dead.

I believe in the Holy Ghost; the holy catholic church; the communion of saints; the forgiveness of sins; the resurrection of the body; and the life everlasting.

Philippians 2: Have this attitude in yourselves which was also in Christ Jesus, who, although He existed in the form of God, did not regard equality with God a thing to be grasped, but emptied Himself, taking the form of a bond-servant, and being made in the likeness of men. Being found in appearance as a man, He humbled Himself by becoming obedient to the point of death, even death on a cross. For this reason also, God highly exalted Him, and bestowed on Him the name which is above every name, so that at the name of Jesus every knee will bow, of those who are in heaven and on earth and under the earth, and that every tongue will confess that Jesus Christ is Lord, to the glory of God the Father.

Colossians 1:  He is the image of the invisible God, the firstborn of all creation. For by Him all things were created, both in the heavens and on earth, visible and invisible, whether thrones or dominions or rulers or authorities–all things have been created through Him and for Him. He is before all things, and in Him all things hold together. He is also head of the body, the church; and He is the beginning, the firstborn from the dead, so that He Himself will come to have first place in everything. For it was the Father’s good pleasure for all the fullness to dwell in Him, and through Him to reconcile all things to Himself, having made peace through the blood of His cross; through Him, I say, whether things on earth or things in heaven.

Wow. These are powerful passages. As Christians we believe that Jesus was born with a mission and a purpose as the very embodiment of Israel’s God, our God. He was Messiah. He was begotten not created. In him and by him everything was created. He came with a mission to reconcile all things to God himself.

If we really believe this, the acts of Jesus described in the gospels are not arbitrary acts – they are part of his mission and the prophetic witness. They display the power of God. The signs and wonders, the miracles of Jesus are both real historical events and
events with deep symbolic resonance.

Did Jesus walk on water? Yes, he walked on water, stilled the wind, healed and restored. Not for convenience but as part of his mission.

Theism not deism. It is common in parts of our society to dismiss the power of God, to reduce theism (belief in a personal interactive God) to deism (belief in a ‘God’ who got everything started). Miracles, signs, and wonders are simply not believable. There must be a rational (read: natural) explanation. But Christianity is not a deist faith; it is a theist faith. God interacts with and in his creation – in relationship with his people. When we consider the signs and wonders in recorded in scripture sometimes a ‘natural’ explanation is found – and the wonder is in the timing not physical cause, but on other occasions no natural cause is present. After all –  the LORD swept the sea back by a strong east wind all night and turned
the sea into dry land to part the waters of the Red Sea. Suggestion of a natural cause and effect does not undermine the work of God. But it need not be sought.

All of this has no bearing on my view of the mechanism of creation. “We” were not present to witness any miracles of timing. It seems to me that any speculation about a miracle, sign, or wonder without an audience is rather pointless. All we are left with is the evidence of God’s work through his natural cause, the historical record of what happened and the ‘natural’ laws of the environment within which it occurred. Evolutionary creation makes the most sense out of the data. There is no need to invoke Intelligent Design over and above the creative power of God through his ‘natural’ process; although ID cannot be ruled out, the gaps, where an adequate ‘natural’ explanation does not also exist, are shrinking. Identification of miracles of timing is well nigh impossible with the passage of time. Many readers will disagree with me on some of this – but not, I hope, because belief in the signs and wonders of Jesus and in his resurrection is in some way contingent on specific understandings of the mechanism of creation.

What do you think? Are the signs and wonders of Jesus real historical events?

Is there any relationship here between your view of creation and your view of the signs and wonders performed by Jesus?

If  you wish, you may contact me directly at rjs4mail[at]att.net