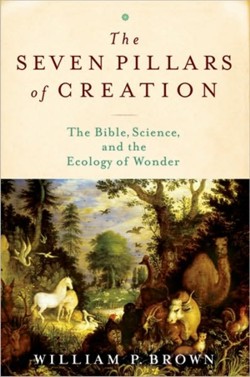 The introduction to a series on William P. Brown‘s new book, The
Seven Pillars of Creation: The Bible, Science, and the Ecology of
Wonder, got off with something of a whimper. Perhaps this post will excite more interest.

The formula of the book is somewhat surreal – a trend most notable in Chs.  3-9 where the seven creation texts are considered. The relation between science and scripture seems almost concordist – while always denying a concordism. The ancient authors did not know modern science and it was not revealed to them yet Brown considers similarities or correspondences.

Today I would like to look at Ch. 2 where Brown considers the literary and cultural context of the creation narratives in scripture. This discussion makes a nice connection with the post on Robinson’s book Absence
of Mind, Peter Enns recent posts Gligamesh, Atrahasis, and the Flood (not to mention Inspiration and Incarnation),  and John Walton’s book The Lost World of Genesis One.

Ch. 2 of Brown’s book contains a brief overview of creation stories in Mesopotamian and Egyptian history. The stories of Mesopotamia have particular resonance with the Biblical creation narrative. According to Brown:

The framers of creation in the Bible inherited a treasure trove of venerable traditions from their cultural neighbors. Instead of creating their accounts ex nihilo, the composers of Scripture developed their traditions in dialogue with some of the great religious traditions of the surrounding cultures, particularly those originating from Mesopotamia and Egypt, as well as those of their more immediate Canaanite neighbors. … Indeed, many of these traditions constituted what could be called the cultural “canon” of Near East antiquity, and it was in relation to them that ancient Israel developed its own. (p. 22-23)

This is a rather abrupt start, and presents a view that stretches the understanding of scripture for many evangelicals. There is a point though, and whether we feel Brown takes it too far, or whether we follow along willingly, we should read scripture in the context and, in so far as possible, through the eyes and intent of the authors and audience.

Marilynne Robinson puts it more clearly in context of the discussion we began in the posts on her book:

Elegant Babylonia, Greece to Assyria’s Rome – ancient yes, and far from primitive. There are no grounds for supposing that a “bunch of Mesopotamians” could have nothing to tell us, or could have said nothing to interest the biblical writers, for that matter. We are entirely in the habit of finding meaning in the writings of ancient India or China or Greece. We are also familiar with the phenomenon of literary allusion. (p. 24-25)

The biblical writers reform, reframe, and retell the story, When there are similarities with other ancient Near East sources these are not surprising and do not undermine the fundamental message and purpose of the biblical text.

In other words, reframing the story is granting its given, that humankind can experience devastation, and then interpreting it in a way that radically restates the conception of God and humankind implied in it. Babylonian culture was powerful and influential. The Gilgamesh epic was found in various forms throughout the ancient Near East. It is absurd to imagine that the most dramatic part of it could simply be patched into the Hebrew and no one would notice the plagiarism. To retell their story with changes would be to defend against its pagan theological implications, and also to address what are, after all, questions of very great interest.

All this assumes that these ancients had an intellectual life, that they had a meaningful awareness of surrounding culture. Archaeological evidence of continuous contact is well established. (p. 25-26)

Robinson suggests that if we grant the biblical writers at all stages the human experience, the intellectual life we take for granted in ourselves, a fully human existence, a mind, then the nature of the texts and their relationship to surrounding culture is neither surprising nor damaging.

Peter Enns gives a related perspective and insight in his book and his series of posts on BioLogos. In the post on Genesis 1 and Enuma Elish (full posts here):

But with subsequent discoveries from other cultures (Sumerian,
Egyptian, Canaanite) and other time periods, scholars came to a more
sober conclusion: Babylonian culture did not have such a widespread
influence, and Genesis 1 was not directly dependent on Enuma Elish.

Instead, these texts are two examples of the kinds of theological
themes that pervaded numerous cultures over many centuries. The
stories are not directly connected, but they share common ways of
thinking about beginnings. They “breathe the same air.”

… It is
very clear that these stories share a common, ancient, way of speaking
about the beginning of the cosmos. They participate in a similar
“conceptual world” where solid barriers keep the waters away,
pre-existent chaotic material exists before order, and light before the
sun, moon, and stars.

Those similarities should not be exaggerated or minimized. But they
are telling us something: even though Genesis is unique, and even though
Genesis is Scripture, it is an ancient story that reflects ancient
ways of thinking.

Genesis 1 cries out to be understood in its ancient context, not
separated from it. Stories like Enuma Elish give us a brief but
important glimpse at how ancient Near Eastern people thought of
beginnings. As I discussed in an earlier post,
ancient texts like Enuma Elish help us calibrate the genre of
Genesis. That way we can learn to ask the questions Genesis 1 was
written to address rather than intruding with our own questions.

There is a growing voice – at least so it seems to me – of Christian scholars who suggest that one prong of an age-old approach to interpreting Genesis 1-11 is wrong. The context of the text has been often misunderstood. Some (peripheral I suggest) elements of theolgy have been misconstrued on the grounds of misinterpretation. This isn’t a modern disavowal of miracles because miracles don’t happen, a denial of the power of God, or a liberal debunking of scripture as a human creation. Rather it is a suggestion by sincere Christians that the context, form, origin, and purpose of the text as Scripture has often been misunderstood to some extent. The impetus comes from a number of directions including science, archaeology, history, and textual analysis.

There is also a resistance – sometimes a strong resistance – to this reinterpretation and rethinking. The resistance isn’t unexpected or surprising. Rather it is healthy and indicates that this is a conversation that we need to have.

What do you think of the suggestions made by Brown, Robinson and Enns?

What role does knowledge of the ANE context play in our understanding of Genesis 1-11?

If you wish, you may contact me at rjs4mail[at]att.net

read next post
Truth by Survey? (RJS)
archives most recent
More from Beliefnet and our partners
previous posts