An Absence of Mind? (RJS) 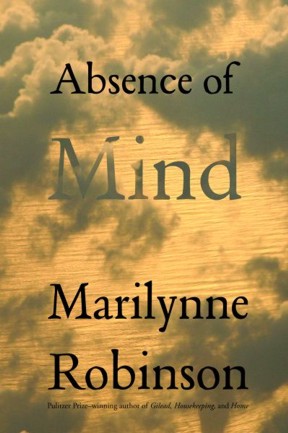 Marilynne Robinson is best known as a novelist for Gilead, Housekeeping, and Home. Her most recent book, Absence of Mind: The Dispelling of Inwardness from the Modern Myth of the Self, takes a stab at something different – but not something new – the question of the Human Mind and the importance of experience. This is something of a science and religion book, an attempt to probe the weakness of secular materialism through consideration of the marvel of the human mind. The book is short, a mere 135 pages ignoring the endnotes and well written (what else would you expect from an award winning novelist?). I read it on a recent trip – and it made an excellent airplane book.

The book contains four chapters, four essays – On Human Nature, The Strange History of Altruism (worth a post in itself), The Freudian Self, and Thinking Again. The central premise is that both modern and postmodern thought minimizes and undervalues the significance and intricacy of the human mind.

Here is the real conflict between science, or what Robinson terms parascience, and religion. The secular myth dehumanizes when it discounts experience, insight, perception and rationalizes the brain in terms of reductionist chemistry and physics. This is not a quarrel over inerrancy or evolution, it is something far deeper.

Does modern thinking do justice to the character, reality, and input of the human mind?

Is the mind reducible to the brain, human experience to the preservation of the selfish gene?

In the essay on human nature Robinson argues that a major flaw of modern thinking in philosophy and science is the elimination from serious consideration of felt experience, perception and abstract reason. Religion is reduced to social systems and demographics – there is no role for spirituality and contemplation of the mysteries of human existence. Social systems are subjects for scientific study – the deep questions of the universe are insignificant distractions. Daniel Dennett and his book Breaking the Spell: Religion as a Natural Phenomenon provide a characteristic example. Robinson notes that Dennett describes religion as “social systems whose participants avow
belief in a supernatural agent or agents whose approval is to be sought,”
nothing more, nothing less – and this is the problem, the error of our day. Robinson continues:

Dennett sheers off the contemplative side of faith, its subjectivity, as if the collective expressions of religion and the inward experience of it were nonoverlapping magisteria, as if religion were only what could be observed using the methods of anthropology or of sociology, without reference to the deeply pensive solitudes that bring individuals into congregations and communities to be nurtured by the thought and culture they find there. Thus he is free to bypass John Donne and the Sufi poets and move on to a description of the practices of the cargo cultists, whom, it is unfortunately fair to assume, anthropology does not present in the richest light either. (p. 9)

Bertrand Russel, unlike the prominent voices of today, acknowledged that religion is deep and that the process of contemplation, introspection, human subjectivity is at play in the acceptance and rejection of religious belief.

As another example Robinson comments on the James Kugel’s book How to Read the Bible: A Guide to Scripture, Then and Now and particularly his discussion of the Genesis flood. Kugel dismisses the biblical text as a religious document. As quoted by Robinson:

Someone who reads the Babylonian flood story will likely find it interesting, or perhaps troubling (because of its clear connection to the Genesis account). But any question like ‘How are we to apply its lessons to our own lives?’ would be greeted by such a reader with incomprehension or derision. ‘Lessons? Why it was written by a bunch of Mesopotamians four thousand years ago!’ If that same person then reads what is essentially the same story in the book of Genesis but finds it full of all kinds of uplifting doctrines – well, such a person is either being dishonest or has simply failed to recognize a fundamental fact. (p. 24 – quoting Kugel p. 80)

This is ridiculous. Far from undermining the search for meaning in Genesis (or the other ancient narratives) Robinson, from her perspective as a novelist and a thinker, suggests that the similarities between Genesis and other texts demonstrate the depth of ancient intellectual life. The dismissive attitude of modern writers says more about us today than
about our forefathers and mothers. And what it says is not a compliment. Literary illusion, theodicy, exploration of the place of man – these are ancient but far from primitive forms and thoughts. There are lessons in the Babylonian narratives and in the sense of the common story told in new light with new insight by the Hebrew writer. The insights of the Genesis story arise not in a sterile vacuum but out of a historical context and, presumably, an encounter with God. Yet for Kugel “the low estimate of Babylonia becomes the basis for a lowered estimate of the Hebrew Bible – the modernist declension. Assuming one narrative is without meaning, we may or must assume the other is too. This conclusion in all its parts is perfectly arbitrary.” (p. 26)

In solving puzzles, exploring nature and presenting facts modern science excels. And yet modern science fails to recognize, dismisses as meaningless the very depth of human experience, and as such, accompanied by a contempt for the past, it suffers from an absence of Mind.

What do you think – is the root of the conflict between science and faith an inherent error of modern times?

Is this a conflict where both sides – secular and Christian – become rooted in modern rationalism and fail to appreciate the depth and sophistication of human experience and the human Mind?

Some day I’ll get around to Gilead, it has been on my to-be-read list for a while.