An Absence of Mind … Is Altruism Rational? (RJS) 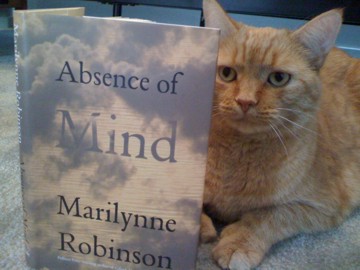 Marilynne Robinson is best known as a novelist for Gilead, Housekeeping, and Home. Her most recent book, Absence of Mind: The Dispelling of Inwardness from the Modern Myth of the Self, takes a stab at something different – but not something new – the question of the Human Mind and the importance of experience. This is something of a science and religion book, an attempt to probe the weakness of secular materialism through consideration of the marvel of the human mind.

Chapter 2, The Strange History of Altrusim, begins with an observation and a question:

The great breach that separates the modern Western world from its dominant traditions of religion and metaphysics is the prestige of opinion that throws into question the scale of the reality in which the mind participates. Does it open on ultimate truth, at least partially or in momentary glimpses, or is it an extravagance of nature, brilliantly complex yet created and radically constrained by its biology and cultural influence? (p. 31)

The chapter wanders – as does much of the book. But there is a coherent theme. Mind and experience opens onto a reality that transcends the merely biological, ruled by the laws of chemistry and physics. Altruism is one of the conundrums of a merely material world. The urge for altruism must be tied to some evolutionary advantage and thus all altruism is truly instinctual self-interest (if “self” is the chemical composition of strands of DNA – the “self”-ish gene.) This leads to an interesting question to consider.

Why do we value altruism and justice? What is the root ground in a pursuit of justice?

In this chapter Robinson makes the following observation:

Justice worth the name tends to exact advantage from anyone who might otherwise enjoy the benefits of relative power. This is a cost which most would be ashamed to notice, and for which they might feel they were fully compensated in the assurance that equity is an active principle. But parascience excludes such subjective considerations. (44)

Think about it – this is an interesting point … justice is related to altruism but requires structure and society, it goes beyond individual charity and voluntary self-sacrifice. In any society, any group there is always a push-pull. A push for rational self advantage, and a pull from deeper altruistic ideals of justice.

Any justice worth the name takes – (steals?) – from those with power and gives to those who are weak and powerless.

Robinson’s discussion in this chapter is thought-provoking. It gets into memes and eugenics and sociobiology and evolution. The issue though is not the science of evolution – the issue is the justification and rationalization of altruism and the pursuit of justice, the metaphysical meaning. The concept of justice is a puzzle for evolutionary theory – the urge for justice undoubtedly exists, common to many societies and peoples. Altruism and pursuit of justice can be rationalized as a consequence of hardware or software.

Many will suggest that the urge for justice and the common good is an instinctual urge built into our biology for the preservation of the species, we have no free will and act as a group as we must. There is an “altruism gene” – an oversimplification but the urge is genetic, it is part of our hardware.

Others will suggest that justice is not biological but cultural, transmitted through the influence of environment because societies thrive with a  cohesive culture of common good – it is selected for at a societal level. The urge for justice is not part of our hardware – it is part of our software. This is how we are programmed. Still we have no free will.

We operate against our immediate self advantage as individuals for the longer term survival of the group.

Modernist thinking will not allow a deeper reason for our pursuit of justice – something that goes beyond mindless selection for survival. That word is used advisedly … selection for survival is presumed to be mindless, mechanistic. There is a consequence arising from the absence of mind in modern thinking – and this is the principle of insignificance. We are insignificant in the universe, except of course to ourselves. Robinson observes:

In one important particular, however, there seems to have been an authentic modern schism whose consequences are persistent and profound. Our conception of the significance of humankind in and for the universe has shrunk to the point that the very idea we ever imagined we might be significant on this scale now seems preposterous. These assumptions about what we are and are not preclude not only religion but also the whole enterprise of metaphysical thought. That the debate about the nature of the mind has tended to center on religion is a distraction which has nevertheless exerted a profound influence on the more central issue. While it may not have been true necessarily, it has been true in fact that the renunciation of religion in the name of reason and progress has been strongly associated with a curtailment of the assumed capacities of the mind. (p. 75)

Put bluntly modernist thought removes the capacity of the mind from the picture and assigns altruism and justice significance only so far as they further the mechanistic survival of self-organized states of matter.

Now I have a problem – the mindlessness of the universe runs counter to our deep-felt conviction. I see no reason to accept it as true. But in what way does religious thinking in general, orthodox Christianity in particular, present a better alternative?  Christians don’t seem to be any less blatantly self centered and interested in self-preservation than other groups. Advantage for self reigns supreme – me, my kin, my people. Power, wealth, and prosperity; these manifest the pleasure and blessing of God. We can rationalize anything. I don’t want this to turn into a political discussion – how we should best pursue justice. Michael Kruse puts forth a strong case for regulated capitalism as a good – even best – route for pursuit of justice. I would rather ask a more fundamental question.

Should justice and pursuit of justice be a central issue in Christian thinking?

Are the concepts of kingdom of God and a just society related? Why or why not?

Do Evangelicals Want to Control DC?
archives most recent
More from Beliefnet and our partners
previous posts