What Do Scientists Really Think? 1 (RJS) 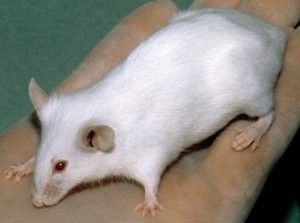 Today I am a lab rat – the little white kind, running through a maze, dissected for examination…

Elaine Howard Ecklund a sociologist at Rice University, with a husband on the faculty in Physics, has published a book Science
vs Religion: What Scientists Really Think. The work reported in this book draws on an extensive survey of nearly 1700 professors at twenty one “elite” universities, in seven core disciplines (chemistry, physics, biology,  sociology, economics, political science, and psychology), augmented by detailed interviews with 275 of them. The book uses 10 representative anecdotal stories to flesh out and personalize the findings. I have spent all but three of the last 29 years, as graduate student, postdoc, and professor, at Universities included in Ecklund’s study. This book is well written, easy to read, and (speaking as a lab rat) she hits the target. I find nothing surprising, but much that provokes thought.

Strictly by the numbers: 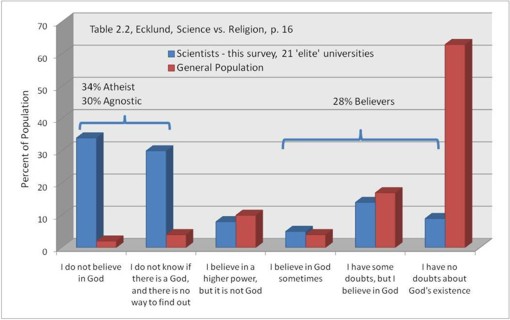 But there is more to it than the numbers alone reflect. In Part I of the book Ecklund describes her findings on the personal faith of scientists – looking at three angles: the voice of science, the voice of faith, and spiritual entrepreneurs. While there is a reputation for secular atheism, “scientism,” and that view is represented, the reality is far more complex. As with any group there is a range of opinion and persuasion.

Do these numbers surprise you?

Do you think these numbers foreshadow changes for the general population in the future?

Taking a brief look at the three categories:

Voice of Science: The chapter on voice of science provides insight into those who dismiss faith. Ecklund identifies three sets of reasons –

Science trumps religion – science deals with facts, religion with ______ (fill in the blank).

Religion has let them down – either through personal experience,  inability to handle the big questions (the problem of pain is a serious one), or the history of “bad” religion in society.

No real background and no sense that religion is either real or important.

A small proportion see religion as a threat rather than simply a waste of time and energy:

Scientists across all disciplines have adopted a “conflict paradigm,” although this group makes up only a small percentage (15 percent) of the 275 scientists I interviewed. A few scientists … flatly declared that there is no hope for achieving a common ground of dialogue between scientists and religious believers. (p. 19)

Voice of Faith: The chapter on voice of faith discusses a number of stories. Some 30% of scientists in elite institutions are active at some level in a faith tradition – mainline protestant, catholic, Jewish, evangelical, other…; about 36% have some form of belief in God or other higher power; about 18% attend religious services once a month or more. 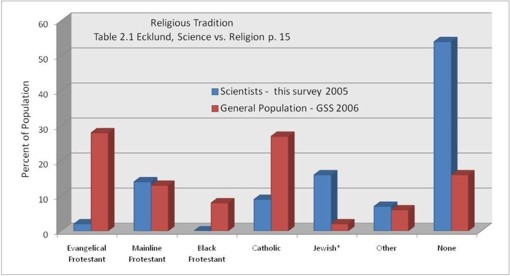 Very few identify as evangelical (2%) – although a somewhat larger percentage practice what we would consider an evangelical faith. The label “evangelical” carries baggage that many are unwilling to embrace. On the conflict issues … “None of the religious scientists I talked with supported the theory of intelligent design. (94% of religious scientists think that evolution is the best explanation for the development of life on earth).” (pp. 29-30). (By my estimate Ecklund found 5 scientists who did not think evolution was the best explanation … I would like to know the fields represented by these five and the reasons given.)

Many of these scientists keep a low profile on all fronts.

The scientists with a faith tradition whom I interviewed often displayed … an identity that is many-sided and fluid. … Religious scientists often feel embattled, both in their scientific and religious communities. At work, they might experience subtle discrimination. At church, if they were to express all facets of their identities as scientists, they might face misunderstanding and rejection, especially within religious communities that sometimes question (or outright reject) the theory of evolution. (p. 47)

Spiritual entrepreneurs: Over 20% of those interviewed see themselves as spiritual, but not religious. Within this group many are atheist. Spirituality does not require belief in the supernatural. This is not the kind of individualistic spirituality that is assembled as though from a religious/spiritual salad bar, pick and choose according to individual taste. Rather it is a coherent and meaningful whole.

The effort of the spiritual scientist is more about pursuing reality and discovering the truthful aspects of spirituality that will be most in line with science. Most often scientists see this individual pursuit of truth, which allows science to stand in the face of criticism, as completely incongruent with religion. For Evelyn, religion connotes a sort of “groupthink.” Spiritual entrepreneurs, on the other hand, conform to nothing but their discovered truth, or search for meaning. And these individual pursuits of truth can often lead to an outward focus rather than shallow preoccupation with oneself.

Scientists who are spiritual entrepreneurs do not consider religious communities likely sources of truth. (pp. 55)

This is an interesting overview of the diversity of views. I know individuals who fit in all of the categories described in this section. This provides an excellent overview of the thinking within the University. Although the numbers change a bit in other disciplines – and substantially in some of the professional schools, these positions are generally represented. I recommend that everyone involved in campus ministry, especially graduate student ministry, read this book – especially Ch. 1-4. All of those active or leading churches in University communities, should read this book – carefully and for insight. There is no way to have a serious impact without knowing something of where others are coming from.

What do you think? Any surprises here?

How should evangelical pastors and leaders and authors talk about “university scientists” after you see these numbers?

What can we do in churches to make scientists feel safe?

If you wish to contact me directly you may do so at rjs4mail[at]att.net 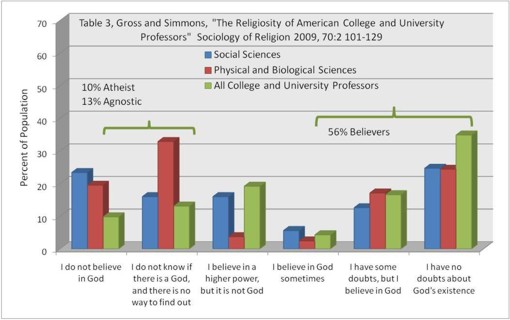