Claiming something is evangelicalism’s biggest challenge is sport for some. I’ve heard a number of items, including complementarianism, the Second Coming, and socialism. I want to register my suggestion, and I believe this idea erodes the very core of evangelicalism. It’s universalism.

Evangelicalism is marked by four features: the centrality of the Bible, the cross as atoning, the necessity of personal conversion and the personal active faith of the Christian. Universalism is an assault on three of these: universalism suggests personal conversion is not finally necessary, it calls into question the importance and even necessity of evangelism as a form of Christian activism, and it weakens the atoning significance of the death of Jesus if it is understood as that which separates the believer from the non-believer.
And I want to point to the facts that indicate universalism is on the rise. The facts come from Rodney Stark, What Americans Really Believe

, and they say this:
1. Since 1957, somewhere between 70 and 80% of the American public has believed in life after death/heaven with some level of confidence.
2. The Baylor study shows that about 66% of Americans are somewhat certain to certain that they will go to heaven.
Now here’s the indicator of growing universalism:
3. In 1964 52% said that one had to receive Christ to go to heaven.
4. In the Baylor study … we get the following, and I’m wondering how you read this chart? 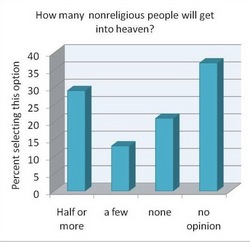