The Challenge of Adam 7 (RJS) 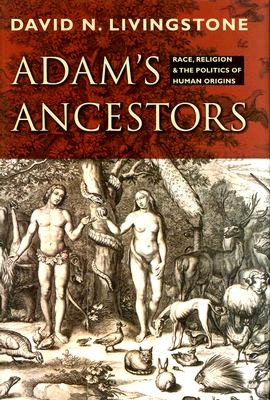 I am currently reading a book by David N. Livingstone, Adam’s Ancestors: Race, Religion, and the Politics of Human Origins. David Livingstone is Professor of Geography and Intellectual History at Queen’s University, Belfast and this book reflects both of his interests. It is a readable, but thorough and academic, book looking at the history of the idea of pre-adamic or non-adamic humans in western Christian thinking from the early church (Origen, Gregory of Nyssa, and Augustine) through the middle ages, the explorations of the fifteenth and sixteenth century, the debates on racial supremacy, and on to the present day.

Chapter 6 of Adam’s Ancestors “Ancestors Evolution and the Birth of Adam” deals with the ways in which believers reconciled Adam and evolution in the late 19th century and the 20th century.  Several different views and thinkers are considered in the chapter – but I would like to highlight here only the writings of Benjamin Breckinridge Warfield on evolution and Adam. Warfield was a reformed theologian, professor of didactic and polemic theology at Princeton. He is widely viewed as the last of the conservative Princeton theologians. He viewed scripture as authoritative, inerrant, and inspired – and evolution as consistent with scripture and consistent with Calvin.

With respect to pre-adamite man as related by Livingstone:

In 1911 Warfield wrote an article for the Princeton Theological Review on the antiquity and unity of the human race. … On turning to pre-adamism, he made a number of telling observations that throw much light on his own treatment of the subject. To him polygenism was to be equated with the “co-Adamitism” of writers such as Paracelsus, and not with pre-adamism as was conventionally assumed. In his mind “co-Adamitism [was] the attribution of the descent of several chief racial types to separate original ancestors,” whereas “pre-Adamitism … concieves of man as a single species, descended from one stock, but represents Adam as not the root of this stock, but as one of its products.” (p. 159; He quotes Warfield from “On the Antiquity” 1-25, reprinted in Biblical and Theological Studies 256.)

Warfield “loathed polygenism in every shape and form, as well as the racial pride that typically went with it” (p. 159), but he also felt that a pre-adamism with humans before or alongside Adam was counter to Christian theology. Adam was the father of the entire human race.

How do these idea fit with an evolutionary creation?

Warfield considered another form of pre-adamism “...which looks upon Adam as the first real man rising in developed humanity above the low, beastlike conditions of his ancestors.” (p. 160)  Warfield considered Christianity, reformed theology, and the writings of Calvin,consistent with the idea that the human body may have evolved, but it became human in an act of immediate creation when it was given a soul.  When reviewing James Orr’s “God’s Image in Man” Warfield “allowed as a distinct possibility that the human body had been formed in emergent evolutionary fashion, “at a leap from brutish parents,” and then fitted with a “truly human soul.” (p. 160)

Conservative Catholic thinkers came to the same general solution to the problem posed by the scientific evidence for evolution and the theological conviction that mankind is special, created in the image of God. The creation of man was a process – not an act, but the break in the chain of evolution comes with the implantation of a human soul.

None of this is to claim a uniform move toward acceptance of any version of pre-adamism. There has been much resistance, from Catholic and Protestant thinkers and at times from the Church. But evolution itself is not inconsistent with Christian theology and need not lead away from an orthodox theology or even an Christian understanding of the nature of mankind.

How can we tell the story? Perhaps as a start: When the time was right God created a human in his image – from the “dust” of his developing creation. He saw that a man – in the image of God, required a helpmate, a spouse, and created him male and female. A major point of Genesis 2, and of Jesus’s reference to Genesis 2, is the sacredness of the marriage partnership. The story of Genesis 2-3 is a story of relationships not a story of creation ex nihilo.

What do you think? Is the special creation of man, male and female, in the image of God tied to the soul? Is the idea of soul a useful – or accurate concept?

If you wish to contact me directly you may do so at rjs4mail[at]att.net.

Law at the Jesus Creed: David Opderbeck
archives most recent
More from Beliefnet and our partners
previous posts