Brad Wright is an excellent sociologist and has a fantastic book coming out from Bethany that will squash some widely-reported and repeated myths about Christians. Here is his study results of the official census data on male church attendance. There are some good charts on the next page. I’m grateful to Brad for this information.

Question: Are There Fewer Male Evangelicals?

The data come from the General Social Survey which has been
collected every year or two since 1972.
It’s a nationwide study that is probably the most frequently used dataset
in sociology.  Thankfully, for
those of us who study religion, it contains good measures of religion.

Figure 1 presents the gender rates among Evangelicals since
the early 1970s.  Throughout the
whole period, a majority of Evangelicals are women, with about 40%-45%
men.  In the early 1970s, the
percentage of men hovered around 45%.
In the 1980s, it dropped to near 40%, and since then it has slowly
rebounded so that it’s now up to about 43%.  While there is a distinct trend in these data, I caution against
over-interpreting them because the percentage of Evangelical men in the 2000s
is not significantly different that the previous decades.  As such, it appears that it might be
increasing, but there certainly isn’t clear evidence of a decline.

By the way, I reran the analyses in Figure 1 looking only at regular attendees (going to church once a month or more), and it told a nearly identical story.  The percentage of male Evangelicals who attended church at least once a month dropped from the 1970s to the 1980s and it has slowly increased since.

Evangelicals have nearly identical rates as Mainline Protestants, more than Black Protestants, and less than Jews and Catholics.

Click on these below and they’ll pop up in a larger readable format. 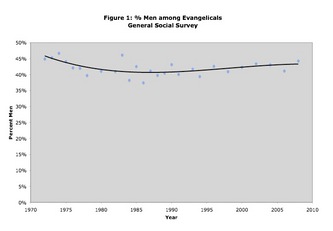