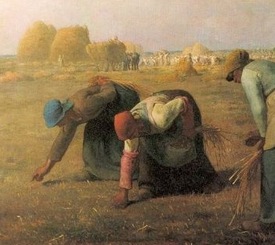 I’m amazed at the comments being made by some evangelicals, in this case the son of Jerry Falwell, that “charity” is purely voluntary and individual, and that charity is not designed by God or by Jesus to be something done by the government. What is happening is that some conservatives are now equating libertarian principles with the Bible and with the biblical world. Libertarian care for the poor is utopian. I quote from Falwell, not because he’s alone, but because he represents a growing trend. Here is a clip from CNN.com:

But a prominent evangelical leader says he, too, is suspicious of churches that preach economic and social justice.

Jerry Falwell Jr., president of Liberty University, a Christian college in Virginia, says Jesus wasn’t interested in politics. He says that those pastors who preach economic and social justice “are trying to twist the gospel to say the gospel supported socialism.”

Falwell says that Jesus believed that individuals, not governments, should help the poor.

“If we all did as Jesus did when he helped the poor, we wouldn’t need the government,” says Falwell, the son of the late evangelical leader, the Rev. Jerry Falwell.

So, let’s consider some basic texts in the Law, which means this: according to our understanding of Scripture, this is God speaking and this is God’s will and this is God’s will for Israel and this is God’s will for a people that was still following that will at the time of Jesus and at the time of the Apostle Paul. Since they never said, “This stuff is verboten, we can assume they thought this sort of law was viable for their world.” That Jesus didn’t speak about electing a government is beside the point; he didn’t have that option. He did live in a world governed by a Torah that let the government have laws that mandated care for the poor. He lived in a world that didn’t just leave it up to individuals. Sure, there was lots of private charity. That too, on top of laws.

And we ought not to construct our Christian principles on what Jesus didn’t say.
Are you seeing an increasing connection of libertarianism with the Bible? Do you think the Bible is anti-government mandated care for the poor? Do you see a radical voluntarism as the biblical model for caring for the poor?
One more point before we get to a simple case for government-mandated charity: I’m not saying whatever the government wants, the government can have. Our government is getting too greedy, and it is getting its hands into too many pockets, and the government needs to be much more fiscally responsible, but the solution is not to equate libertarian radicalism with what the Bible says and pretend the Bible is teaching our political theory. Least of all, I’m not saying let’s trust the government to take care of all the problems, but the government can protect the poor from the lack of generosity by many who fail to respond to the needs (Michael Kruse pointed out to me that this is “subsidiarity”.)
I want to increase the church’s role in alleviating poverty and working out justice, but libertarian radicalism is not the answer. I’m all for more locally-shaped charity. It appears to me the the solution is two-fold: let’s be Biblical and let’s practice justice in the best way possible, which in our fallen world combines individual compassion and governmental support.
So here’s a set of texts that show that the Bible mandated charity and didn’t leave it up entirely to individuals to make the decision.

First, the law of gleaning mandated — a command from God — that farmers leave a portion of their crops unharvested for the poor. (Think Ruth; without this law perhaps she doesn’t survive.) Sure, they had to choose to do this but it was mandated law not simply voluntary practice. Leviticus 19:

Yes, by all means, again and again, we don’t just transport laws from ancient Israel into our world, but one thing can’t be denied: God mandated charity for the poor as a law, and this wasn’t just voluntary. It was law. It was God-mandated and governmentally-instituted and, probably, privately-enacted.
Second, what of the Year of Jubilee in Lev 25? What can we make of this, if not the mandated return of property in order to prevent excessive accumulation? This is clearly a governmentally-shaped economic-sharing law.

25:8 “‘You must count off seven weeks of years, seven times seven years, and the days of the seven weeks of years will amount to forty-nine years. 25:9 You must sound loud horn blasts – in the seventh month, on the tenth day of the month, on the Day of Atonement – you must sound the horn in your entire land. 25:10 So you must consecrate the fiftieth year, and you must proclaim a release in the land for all its inhabitants. That year will be your jubilee; each one of you must return to his property and each one of you must return to his clan. 25:11 That fiftieth year will be your jubilee; you must not sow the land, harvest its aftergrowth, or pick the grapes of its unpruned vines. 25:12 Because that year is a jubilee, it will be holy to you – you may eat its produce from the field.

25:13 “‘In this year of jubilee you must each return to your property. 25:14 If you make a sale to your fellow citizen or buy from your fellow citizen, no one is to wrong his brother. 25:15 You may buy it from your fellow citizen according to the number of years since the last jubilee; he may sell it to you according to the years of produce that are left. 25:16 The more years there are, the more you may make its purchase price, and the fewer years there are, the less you must make its purchase price, because he is only selling to you a number of years of produce. 25:17 No one is to oppress his fellow citizen, but you must fear your God, because I am the Lordyour God. 25:18 You must obey my statutes and my regulations; you must be sure to keep them so that you may live securely in the land.

And, it ought to be observed that most biblical scholars think Jesus evoked Jubilee in his first sermon in Luke 4:18-19. We are dealing here with mandated economic restriction and mandated care for the poor and a society mandated by a concern for economic injustices.

4:16 Now Jesus came to Nazareth, where he had been brought up, and went into the synagogue on the Sabbath day, as was his custom. He stood up to read, 4:17and the scroll of the prophet Isaiah was given to him. He unrolled the scroll and found the place where it was written,

because he has anointed me to proclaim good news to the poor.

He has sent me to proclaim release to the captives

and the regaining of sight to the blind,

to set free those who are oppressed,

Third, there is law in Israel’s books called tithing that involved mandated and obligatory and governmentally-sponsored care for the poor. Read it, it’s right here from Deuteronomy 14:28-29, and it’s law and that means it’s against the law not to participate. This one is individually-given and then evidently distributed by the villages.

14:28 At the end of every three years you must bring all the tithe of your produce, in that very year, and you must store it up in your villages. 14:29 Then the Levites (because they have no allotment or inheritance with you), the resident foreigners, the orphans, and the widows of your villages may come and eat their fill so that the Lord your God may bless you in all the work you do.

Fourth, the apostle Paul, in a time much trickier than what any North American or European is facing, mandated that the Christians pay taxes to Rome. Godless, rapacious, idolatrous Rome. Let Rome collect taxes; let Rome distribute the money as Rome sees fit. That’s what was happening when Paul said this. From Romans 13

13:5 Therefore it is necessary to be in subjection, not only because of the wrath of the authorities but also because of your conscience. 13:6 For this reason you also pay taxes, for the authorities are God’s servants devoted to governing. 13:7 Pay everyone what is owed: taxes to whom taxes are due, revenue to whom revenue is due, respect to whom respect is due, honor to whom honor is due.

Finally, what do you think Paul means here in 2 Cor 8:13-15, if he does not mean mandatory (and voluntary) charity for others and that, someday, it will come back to you — a kind “social security” in Paul’s day? [The word “equality” is a radical idea of economic fellowship and mutual responsibility.] Perhaps, you will say, “this is for Christians with Christians.” Probably so, but isn’t it mandatory care for the poor? Wouldn’t it be Christian to expand that principle into culture?

8:13 For I do not say this so there would be relief for others and suffering for you, but as a matter of equality. 8:14 At the present time, your abundance will meet their need, so that one day their abundance may also meet your need, and thus there may be equality, 8:15 as it is written: “The one who gathered much did not have too much, and the one who gathered little did not have too little.”

Aksel, Ready for Bed!
archives most recent
More from Beliefnet and our partners
previous posts