Eugene Peterson, in his new book, Practice Resurrection: A Conversation on Growing Up in Christ

explores the church in Ephesians 2, and lands upon an idea worth pondering today:

Do we focus on the function of the Church or the ontology of the Church? That is, on what it does and can do and should do or upon what it is by the act of God?
Notice this from Peterson. Ephesians 2:11-22 has nine verbs of divine action: Jesus is our peace, he made us one, he broke down the dividing wall of hostility, he abolished the law, he created one new humanity, he made peace, he reconciled, he put to death, and he proclaimed peace (see text after jump).
With five passive verbs, which show God’s acts on our behalf; the church is not something we do: we are brought near, Spirit gives us access, built upon the foundation, we are joined together, and we are built together.
2:11 Therefore remember that formerly you, the Gentiles in the flesh – who are called “uncircumcision” by the so-called “circumcision” that is performed on the body by human hands – 2:12 that you were at that time without the Messiah, alienated from the citizenship of Israel and strangers to the covenants of promise, having no hope and without God in the world. 2:13 But now in Christ Jesus you who used to be far away have been brought near by the blood of Christ. 2:14 For he is our peace, the one who made both groups into one and who destroyed the middle wall of partition, the hostility, 2:15 when he nullified in his flesh the law of commandments in decrees. He did this to create in himself one new man out of two, thus making peace, 2:16 and to reconcile them both in one body to God through the cross, by which the hostility has been killed. 2:17 And he came and preached peace to you who were far off and peace to those who were near, 2:18 so that through him we both have access in one Spirit to the Father. 2:19 So then you are no longer foreigners and noncitizens, but you are fellow citizens with the saints and members of God’s household, 2:20 because you have been built on the foundation of the apostles and prophets, with Christ Jesus himself as the cornerstone. 2:21 In him the whole building, being joined together, grows into a holy temple in the Lord, 2:22 in whom you also are being built together into a dwelling place of God in the Spirit. 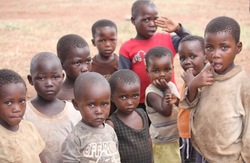