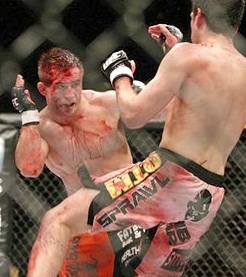 I read this piece by James-Michael Smith the other day, and I thought it was so good I lifted a couple paragraphs and would love to have a discussion here: What do you think of “manly” and “fighting” images for Jesus? (The italicized was the context and the author’s own article begins when it turns to regular font.)

The goal, these pastors say, is to inject some machismo into their ministries — and into the image of Jesus — in the hope of making Christianity more appealing. “Compassion and love — we agree with all that stuff, too,” said Brandon Beals, 37, the lead pastor at Canyon Creek Church outside of Seattle. “But what led me to find Christ was that Jesus was a fighter.”“

This is not an unknown sentiment among evangelical Christians.  Writer John Eldredge has built an entire ministry on the concept of portraying the Christian life in masculine terms.  His best-known book, “Wild at Heart” has become a staple among churches’ men’s ministries.

More recently, Seattle pastor Mark Driscoll drew criticism for his desire to portray a manlier Jesus–or in Driscoll’s words, an “Ultimate Fighting Jesus.”  For an overview of this phenomenon, particularly how Eldredge and Driscoll have contributed to it, see the April 2008 article in Christianity Today entitled “A Jesus for Real Men.”

And for the record, the gentle-Jesus-meek-and-mild presentation is every bit as skewed and unbiblical as the Ultimate Fighting Jesus.  The truth lies in the middle of these two extremes.