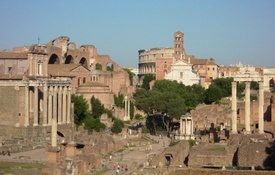 Paul gets to explain his gospel to the Jewish community in Rome, and here’s what he said:

28:23 They set a day to meet with him, and they came to him where he was staying in even greater numbers. From morning until evening he explained things to them, testifying about the kingdom of God and trying to convince them about Jesus from both the law of Moses and the prophets. 28:24 Some were convinced by what he said, but others refused to believe. 28:25 So they began to leave, unable to agree among themselves, after Paul made one last statement: “The Holy Spirit spoke rightly to your ancestors through the prophet Isaiah 28:26 when he said,

Paul, in response, jabs them with Isaiah, something that was at the center of Paul’s theology and in his letter to Rome: why his fellow Jews did not embrace Jesus as Messiah befuddled Paul but he found an answer for it in Scripture. And nothing is more central to Paul’s missional theology than his reading of Scripture. To the Jews first, and then to Gentiles.

‘Go to this people and say,

“You will keep on hearing, but will never understand,

and you will keep on looking, but will never perceive.

28:27 For the heart of this people has become dull,

and their ears are hard of hearing,

and they have closed their eyes,

so that they would not see with their eyes

and hear with their ears

and understand with their heart

and turn, and I would heal them.“‘

28:28 “Therefore be advised that this salvation from God has been sent to the Gentiles; they will listen!”

A Letter, Now Opened
archives most recent
More from Beliefnet and our partners
previous posts