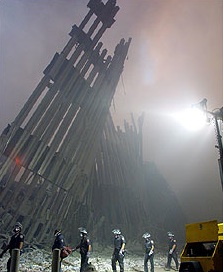 I wonder who has given thought to the decision to try Kalid Sheikh Mohammed in NYC? Some are predicting disaster and little more than the hypocrisy of a show trial, while others think the trial will show Americans can be just toward terrorists, while yet others think doing such a thing in NYC is a bad idea. What do you think? Here’s a clip from an editorial.

The Khalid Sheikh Mohammed trial will be a show trial – make no mistake about it. No matter what proponents of this move may say, this trial isn’t about upholding American “values” or about proving the moral supremacy of our judicial system.

This is about giving a brutal terrorist an international stage to communicate with and energize al-Qaeda sects all over the world. It’s about focusing the attention of suicidal killers on a city that can ill afford to go through another 9-11.

We all know that no matter what a judge or jury decides, Khalid Sheikh Mohammed cannot be allowed to walk free. Indeed, Attorney General Holder has refused to even entertain questions considering the possibility of any outcome other than guilty – going as far as to guarantee the American people a conviction.

I ask, why bother to have a trial if the outcome is supposedly guaranteed? What will the Justice Department do if he is acquitted on a technicality that has already been fully vetted by the U.S. Supreme Court like failure to read him his Miranda rights, for example?