By Scot McKnight
When this big fella came by for Trick or Treat,
we gave him our pumpkin!

It has been a grey, cloudy, cold week here at the Jesus Creed blog, the World Series plodded along with yet one more trophy for the bad guys, and here in Chicago the hopes are beginning to heat up for next summer’s Cubs season, though some oddsmakers find better chances for John Kerry and Sarah Palin.
Wisdom for responding to stereotyping Asians. See the reports on reconciliation. Soong-Chan Rah’s most recent reflections.

TSK’s post on why he’s not a New Calvinist but should be is full of fun.
Ted’s right: we need both.
Joan Ball, capitalism and the ethics of the gospel. Very important observations.
I with Tyler Wigg-Stevenson on nuclear reduction: Two futures, one choice.
Christine’s wanderings now on meanderings.
Pastors, depression and suicide. (HT: JM)
Pastors, preaching and advertising.
Businessmen, Christians, families … well just read this one slowly.
Be careful of your Tweetcritiques. (HT: via Twitter AB)
Be careful of your speeding … but what a story.
Be careful with your critics. (HT: JM)
Pete Enns on science and our view of Scripture.
Andy Rowell gets it going at Out of Ur.
Sarah Pulliam Bailey at Get Religion.
Ed Dobson and Dan Kimball.
Kingdom story.
In 5 years, what will cyberspace and the internet look like? (HT: TS)
1. Greenhouse gasses and their unlikely sources.

2. Bono goes African.
3. Anyone there? Anyone see? Anyone know? (HT: MC)
4. Bob Greene on time …: “One day we were walking down city streets making eye contact with each other, taking in the local scenery, and the next we were staring at the screens of our hypnotic phones, receiving real-time messages and breaking-news updates from people hundreds of miles away. It was a tradeoff we didn’t exactly ask for. Yes, the concept of distance was all but erased — but so, in a way, was the concept of place. We were sold the notion that we could be anywhere, with the tap of a key. What we only gradually began to recognize was that, by being everywhere, sometimes it felt like we were nowhere.”
5. Karen Houppert: experiencing a room of her own.
6. When politics fails to test policy with brutal realities.
7. Women don’t ask for raises as often as men.
8.  Our growing problem with Eur-o-pee-ins.
9. The brain’s memory and the digital world.
10. The cyberspace cloud.
Sports 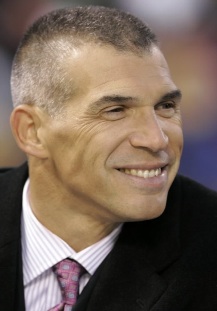 A good weekend for our NCAA football teams: Iowa wins, Illinois wins (beats UMich), and Northwestern wins (well, they were winning when I wrote this).
The Ultimate Yankee!
(Because he was first a Cub.)
read next post

Religion or Revolution? 3
archives most recent
More from Beliefnet and our partners
previous posts