Late summer I read Hala Jaber’s gripping memoir of life in Iraq called: The Flying Carpet of Small Miracles: A Woman’s Fight to Save Two Orphans

. If you can read this without tearing up, well, you can’t. Hala weaves together her own story, her fight with her own infertility, the devastation in Iraq, her critique of what war does to countries and people and children … and how her coverage of Iraq led her to one family and one child … and the memoir is my “Memoir of the Year.” I wrote to Hala Jaber and asked if she would be interested in an interview. She’s a journalist and she travels back and forth between London and the Middle East, and we are privileged at this blog for Hala Jaber to give us this interview. So, enjoy … and get that book and read it and tell others about it. She tells us things about little Hawra that maybe few others know.
As a memoir, this book read for me like an enchanting and ever-unfolding novel with elegant, clear prose. What advice would you give to writers who want to write a memoir?
Each part of our lives is a story on its own at the end of which we are all
unique living novels. Our memoirs reflect our lives, a journey in our lives,
or an incident and a chapter of our lives. We recollect each one in our
minds as a tale and recount them to others as a story with high and low
points when we are talking or describing them. Some of us who decide to
write about them do so because we have deemed it important or interesting
enough to share with the world. So my view is, if we thought of sharing a
part of our lives with the world at large and are asking people to read
about our memoirs, then we should at least make it interesting enough in the
style of writing we present it to them. Write it simply, honestly and in the
fashion that initially made you believe it was interesting enough to share
with others.

How does your experience of covering the lives of ordinary folks, especially children and families, impact your faith?

Enormously and in a mixture of ways. It has at times made me question my
faith, god and being, at others it has left me in awe of god and faith and
has humbled me as a person. Over the years I have struggled with my faith at
times, questioned God’s will and wisdom when confronted with injured
children in pain and on some occasions I even went as far as blaspheming. I
have cried, ranted at times and even shouted to him and at him, ‘why God
why’ yet after each stage of my turbulent journey with faith as I see mine
has been, some of these same experiences, people and children also taught me
how to accept my faith and God’s will. I am at peace now having learnt the
hard way that I cannot challenge God’s will and that things happen for a
reason even if I don’t necessarily understand the reasons at times.

How do you think the story of Zahra, Hawra and Grandmother
illuminate for Americans what the war in Iraq is really like at the ground
level?

It brings home to Americans and all of us the home truth of the impact of
war any war on ordinary lives, be they children, women or men. We watched a
war break on television and saw images of high tech bombings, so called
smart bombs dropped from the skies above and we were oblivious to what was
on the ground in the form of children like Zahra and Hawra, to the suffering
and loss for people like grandmother. Zahra and Hawra could have been
anyone’s children and grandmother is everyone’s grandmother in effect. Their
story represents Iraq’s story be it in 2003 or now. It reflects the human
cost of war. When militaries packs up and leave and politician declare
mission accomplished and move to the next war or issue in the world, they
also leave behind destroyed lives, shattered dreams and homes that will
never be the same.

Hala, time and time I said to myself, “This woman is a daredevil
with extraordinary courage.” Explain for us where you got reserves of
courage to enter some of the most dangerous war zones in Iraq in order to
tell the story of what was going on at ground level.

I don’t know if it was courage, but I am sure that whatever it was it came
from a strong sense of belief that I should be in these places witnessing
and recording the impact of war on ordinary lives. My heart pounded, my
palms sweated at times and my feet dragged with heaviness on some occasions
from fear, I was never not afraid, but whatever fear I carried was driven
and overruled largely by a sense of duty and obligation I felt to witness
and report on the impact of war on the ordinary man, woman and child. They
became my obsession, and on many occasions I felt as if Zahra was guiding me
and pushing me to witness these incidents and write about them so they are
recorded in history somewhere.   Her death and the obliteration of all
members of her family did not even make a headline anywhere, I was
determined to ensure that the voices of others be heard.

What four words come to mind as you describe what Iraq is like today? 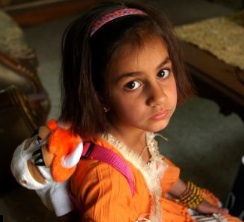 What’s the news on Hawra today? What can we do to help with the victims of war in Iraq?

I just came back from a six week trip to Iraq where I saw and spent time
with little Hawra. She is gorgeously beautiful, happily loved by grandmother
and yet fearful of her own environment and country. She loves fashion and
has a great eye for clothes and what she likes. She is happy at school, and
is proud she can write and read already and only one year after attending
school.
“I want to go to school abroad with you,” she told me as we sat together one
afternoon. “Sure,” I said “maybe in a year or two when you are a bit older
we start the process,” only to be surprised by her next answer. “No aunty
now and I don’t want to come back to Iraq,” she announced to my utter
surprise and shock. When I delved further I realized that at seven Hawra is
more aware and sensitive to the dangers around. There has been a lot of car
bombs and incidents in Iraq recently and she was becoming afraid of her
surroundings and the danger of not being able to travel freely.
I spoke to the grandmother about this and I started their passport process
and hope to take them both to Beirut early next year to begin introducing
them to life beyond Baghdad and their neighbourhood. I also hope to start a
fund of some sort for Little Hawra to ensure that she is educated and well
provided for in the future.
Yet Hawra is a lucky child despite all her losses. My trip was to work
identifying injured children of war and to launch an appeal to help them get
medical treatment abroad. So may sad cases, so many destroyed children. My
newspaper the Sunday Times launched the appeal last weekend in the magazine
section link below, and for the next four weeks the newspaper will publish a
case of a child a week and how people can help (you can access it online at
the Sunday times online site every Sunday). Take a look at the link below
read their stories look at their faces and eye and the details are there if
you feel you can help. These children desperately need it. I hope some of
you will have the heart to do so. There is a bottomless well of injured
children there that need help, and while we cannot save everyone perhaps we
can help some.