We’ve had grey, rainy weather, so I thought that
maybe some sunflowers would greet us this morning
for a little lift.

Like Lake Wobegon, it’s been a busy but good week in cyberspace…

Colson’s piece on atheists who become believers: any comments?
TSK’s piece on all things emerging throughout the world: any comments?
Molly Aley’s piece on landing in an oil slide: any comments?
David Opderbeck’s post on science and faith … at BNet … MUST read.
20 somethings helping 50somethings in the business world.
Read deep enough in this piece to see his question.
Sarah Pulliam Bailey‘s discussion of Hillary Clinton’s stance against the anti-defamation agenda and pro-freedom of speech point of view. (Congrats to Sarah for her coverage on this issue.)

A joke that appeals to more than one arena: A minister stood in front of his congregation and announced, “I have good news and bad news. The good news is we have enough money to pay for our new building program. The bad news is that it’s still in your pockets.”
I pay attention to and support organizations that track and interpret and judiciously speak against abortion, and I find Americans United for Life, led now by Charmaine Yoest, intelligent and fair-minded.
The future of newspapers? Will we see space where various voices can interact? The priesthood of all news readers and the citizen journalist. (HT: TJ)
Christine Scheller’s faith story.
Stressful jobs where the salaries are not good (ministers are among them).
Make sure you read Kavin Rowe.
And Don Johnson.
Advice for bloggers: make it personal.
Advice for the married: know it’s not easy.
Collin Hansen keeps his finger on the Reformation issues at work in contemporary evangelicalism.
Did you see the Ten Most Expensive colleges? North Park, which is about half the tuition of these schools, has one of the best tuition packages in the USA for a private school. 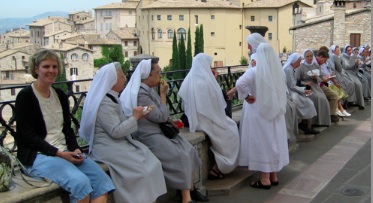 1. Women and the work force and salaries.
2. Speaking of women: Hollywood and the strong female protagonist.
3. Women speaking about women: Mona Charen disagrees.
4. Instead of helping us understand the genuine plight of nuns, Maureen Dowd turns her column into a bully pulpit about the Pope.
5. Hispanics and the future of the American Catholic Church:  “Hispanics are the present and Hispanics are the future of the Catholic Church in the United States,” says Moreno Garcia. One-third of all Catholics in the United States are now Latinos thanks to immigration and higher fertility rates, according to the Pew Forum on Religion and Public Life. While St. Cecilia’s parish has relished the growth, elsewhere, the Latino population boom has rocked the pews.”
6. A.N. Wilson on the Catholics and Anglicans; a CNN piece on “emergent Jews.”
7. Bidenisms are updated weekly.
8. The anti-Fox News brouhaha.
9. Amazon’s stock up 30%.
10. This is sad, this is true — and a MD friend of ours told us the same the other day.
Sports
Antoine Walker, broke. (HT: JC)

U2 -- Your Favorite?
archives most recent
More from Beliefnet and our partners
previous posts