Again, another great post from Jeremy Berg, and I’m keen to hear what you have to say. How do you respond to this mixture of football (sports) and faith? It has made the news here and here. Al Mohler has weighed in … and it’s your turn today.

“And when you come before God, don’t turn that into a theatrical production either. All these people making a regular show out of their prayers, hoping for stardom! Do you think God sits in a box seat? Here’s what I want you to do: Find a quiet, secluded place so you won’t be tempted to role-play before God.” 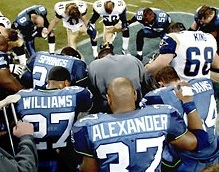 October is in air and that means among other things: the major league baseball pennant race. I have been watching the MLB playoffs the past couple weeks and once again have been reminded of how big of a sports fan God apparently is.  Interview after interview, amidst showers of champaign and victory cigars (which are not my concern, by the way), I’ve heard players giving credit to God for their postseason success.

Now, theologically speaking, it is very possible for the omnipresent God to have season tickets to every game of every sport in every city every single night. (I was imagining Him taking the best seat behind home plate until I remembered Luke 14:7-11.) But I have to ask the question every time He is credited with one team’s victory over another: How interested is God in professional sports?  Should we assume this is where God is placing his interest and time on any given night?  (I know, God isn’t limited to one Friday night option, but you get my point.)

Now, I really don’t want to be a party-pooper here.  I absolutely encourage Christian athletes to give God the glory for their talent and to be grateful for all his blessings — blessings that include the rare opportunity to play professional sports and enjoy success at it. I have said many times to the students I minister to: “If I could relive my high school basketball days, I’d begin every game in silent prayer asking to let my talent glorify Him and end every game in quiet thanksgiving by my locker.”

But this is something quite different than assuming Jesus was pulling for my team over the loser, tipping my hat to Him on camera for spiritual kudos in heaven or to appear more pious and devout than I might otherwise be when not in the spot light. I can’t read their hearts or judge their motives, but something just makes me cringe inside when I witness this.

What do you make of this phenomenon?   Does it bother you?  What is the appropriate way for athletes to acknowledge God in situations like this?  What are the dangers and abuses to look out for?  Do Jesus’ words above from  Matthew 6 speak to this issue at all?

read next post
Media: My question to you
archives most recent
More from Beliefnet and our partners
previous posts