We’ve had extensive conversations on this blog on the issue of women in
ministry. The topic comprises the last third of Scot’s book The Blue Parakeet: Rethinking How You Read the Bible

, and is at the root of many of the contemporary conflicts within our church, including those over tribal translations.  I generally stay on the periphery of these discussion because they always leave me feeling sick – and just a little dirty. 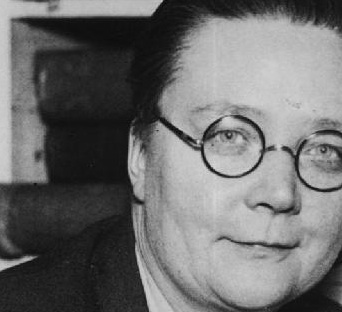 A few weeks ago Scot posted a series in Chris Armstrong’s book  Patron Saints for Postmoderns: Ten from the Past Who Speak to Our Future

.  The final “saint” Armstrong highlighted was Dorothy Sayers, a woman many know as the author of the still popular Lord Peter Wimsey detective novels … but who also translated Dante and wrote on theology. Dorothy Sayers was an amazing woman, a trailblazer, and a great thinker. She was far from perfect – but that only makes her human.  Or does it?

There is a short volume Are Women Human? containing two essays by Sayers on this very topic.  Anyone who reads both this book and her novel Gaudy Night will immediately recognize the coherence of her overall view.

I am going to put up a few posts on this book over the next week or so, focused on some of  Sayers’ key points. Today  I would like to put forward a brief excerpt from this book and open the floor for discussion.

We are all human. The first premise of Dorothy Sayers in these essays is quite simple. We are all human first  and deserve to be taken first and foremost as individual human beings.  Depending on context male or female may, or may not, be the most important secondary descriptor. Sayers’ view is grounded in her self understanding, her experience, and her view of both Jesus and God.

Toward the end of her essay The Human-Not-Quite-Human Sayers gives an interesting view of Jesus (and a quite harsh view of the Church).  This is where I would like to start the discussion.

God, of course, may have his own opinion, but the Church is reluctant to endorse it. I think that I have never heard a sermon preached on the story of Martha and Mary that did not attempt, somehow, somewhere, to explain away its text. Mary’s of course was the better part – the Lord said so and we must not precisely contradict Him. But we will be careful not to despise Martha. No doubt He approved of her too. We could not get on without her, and indeed (having paid lip-service to God’s opinion) we must admit that we greatly prefer her. For Martha was doing a really feminine job, whereas Mary was just behaving like any other disciple, male or female; and that is a hard pill to swallow.

Perhaps it is no wonder that women were the first at the Cradle and the last at the Cross. They had never known a man like this Man – there never has been another. A prophet and teacher who never nagged at them, never flattered or coaxed or patronized; who never made arch jokes about them, never treated them as “The women, God help us!” or “The ladies, God bless them!”; who rebuked without querulousness and praised without condescension; who took their arguments seriously; who never mapped out their sphere for them, never urged them to be feminine or jeered at them for being female; who had no axe to grind and no uneasy male dignity to defend; who took them as he found them and was completely unself-conscious. There is no act, no sermon, no parable in the whole Gospel that borrows its pungency from female perversity; nobody could possibly guess from the words or deeds of Jesus that there was anything “funny” about woman’s nature.

But we might easily deduce it from his contemporaries, and from His prophets before Him, and from His Church to this day. Women are not human; nobody shall persuade that they are human; let them say what they like, we will not believe it, though One rose from the dead. (p. 46-47 from 1981 printing)

Wow – quite a no-holds-barred statement. As Sayers sees it the Jesus of the gospels, the divine Son of God, treats women as first, foremost, and solely human. No qualifiers, no caveats. The Church got it wrong.

What do you think of Sayers’ description of Jesus and his view of and approach toward women?  Does she get it right?