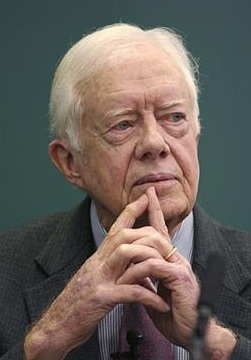 We were away when Jimmy Carter’s oft-repeated idea about women and the Southern Baptists was recirculated in the media: he’s evidently withdrawn from the Southern Baptist Convention over its tightened up restrictions on women and his perception that it has diminished equality of the sexes. He first made waves about this in 2000 and then at least one other time. And now he’s repeating his point again.

But I have this question: What does it mean for Jimmy Carter to resign from the SBC when (1) individuals aren’t members of the SBC but of local churches that are associated with the SBC? And, more importantly, (2) when he continues to be a member of his SBC church and teaches Sunday School there? So, I ask, in what sense has Carter resigned or withdrawn?

Readers of this blog know I stand with Carter on the importance of women in ministry and of equality (though I like to use the term “mutuality”). I applaud his moral courage to stand up for what he believes and for fighting for justice for women. But why buttress this all with something about resigning from the SBC?

read next post
We survived...
archives most recent
More from Beliefnet and our partners
previous posts