The Bible and Authority (RJS) 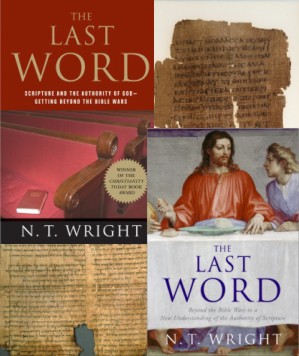 A few years ago NT Wright published a short book on the authority of scripture: The Last Word: Scripture and the Authority of God–Getting Beyond the Bible Wars

1. In what sense is the Bible authoritative?

2. How can the Bible be appropriately understood and interpreted?

The central claim of Wright’s book is that all authority belongs to God – and thus scripture is authoritative only in the sense that the authority of the triune God is exercised through scripture. In fact, Wright goes so far as to say that scripture itself points — authoritatively, if it does indeed possess authority! — away from itself and to the fact that final and true authority belongs to God, now delegated to Jesus Christ.(p. 24)

And a great line — When John declares that “in the beginning was the word,” he does not reach a climax with “and the word was written down” but “and the word became flesh.” (p. 23).

The Bible is story. According to Wright the bible is not a list of rules – although it contains commandments. The bible is not a compendium of true doctrines – although it declares great truths. And the bible transcends revelation – it doesn’t convey information from or about a mostly absent God, rather it is self-revelation for and about relationship – the relationship of God with his creation for his mission. Scripture is best described first and foremost as Story.

…the shorthand phrase “the authority of scripture” when unpacked, offers a picture of God’s sovereign and saving plan for the entire cosmos, dramatically inaugurated by Jesus himself, and now implemented through the Spirit-led life of the church precisely as the scripture-reading community. … We read scripture in order to be refreshed in our memory and understanding of the story within which we ourselves are actors, to be reminded where it has come from and where it is going to, and hence what our own part within it ought to be. (p. 114)

We are to read scripture with tradition in communion with the saints, and with reason attentive to context, to sense and to wider knowledge of all sorts.

“Reason” will mean giving attention to, and celebrating, the many and massive discoveries in biology, archaeology, physics, astronomy, and so on, which shed great light on God’s world and the human condition. This does not, of course, mean giving into the pressure which comes from atheistic or rationalistic science. … “Reason” is more like the laws of harmony and counterpoint: it does not write tunes itself, but it forms the language within which tunes make powerful sense.

We honor the authority of scripture when we read it properly. We should read scripture in a totally contextual manner. “All scripture is “culturally conditioned.” It is naive to pretend that some parts are not, and can therefore be treated as in some sense “primary” or “universal,” while other parts are, and can therefore be set aside.” (p. 128)  According to Wright even the doctrine of the divinity of Jesus and the doctrine of justification by faith are culturally conditioned and must be understood in their biblical and cultural contexts.

Such a contextual reading is in fact an incarnational reading of scripture, paying attention to the full humanity both of the text and of its readers. This must be undertaken in the prayer that the “divinity” — the “inspiration” of scripture, and the Spirit’s power at work within the Bible-reading church — will thereby be discovered afresh. … Genuine orthodoxy needs both, and in proper mutual relationship. (p. 129-130)

We should also read scripture liturgically, privately, refreshed by scholarship, and as taught by church leaders (through studied, biblical sermons and teachings).

This is a great little book – well worth reading and discussing. We err when we make scripture the foundation of our faith.  Our foundation is God alone, the rock on which we
stand is God alone – and his work in this world, including the atoning
work of Christ. The authority of scripture is a shorthand for the authority of God – revealed by the Spirit. Scripture illuminates God, his nature and his
interaction with his creation – it tells his story, and it does so reliably. But it does so in a fashion that may tell important theological truths in mythic form.  The humanity of the authors and their points of view and cultural contexts played a role in the nature of the text we inherit. Reading scripture with a hermeneutic of trust and faith in the light of scholarship, biblical, scientific, and more will, through the power of the Spirit reveal God in our context today.

What do you think? Is the “Authority of Scripture” an important concept? Do you think this authority is undermined if Genesis appropriates ANE myth, Exodus is an embellished history, Job is story, John rearranged events in his Gospel to make theological points?

What elements are necessary to faithfully and reliably tell God’s story?