in our school days. That book’s protest was particularly important during the 1960s and 70s in the days of the civil rights movement. At the heart of Paton’s novel is Soweto (South West Township), the famous settlement of Africans who worked in the mines of Johannesburg. During the years of apartheid Africans lived in homelands, where they had the rights for self-government, needed a card to be outside their “country” and in South Africa, and many of the men lived in the settlement of Soweto — leaving wife and kids much of the time without husband and father. The situation has been described by others better than I can do here.

One young passionate lawyer in Soweto was a man named Nelson Mandela, and he has told his own story from a homeland to Soweto and then to imprisonment on Robben Island (off Cape Town) and then freedom in this famous autobiography: Long Walk to Freedom: The Autobiography of Nelson Mandela

Marius Nel wanted us to see Soweto and we wanted to see it. What we didn’t know much about is that Mandela’s house is now a museum. Here’s a picture on the back porch, and as we sat across the street (from the other side of the house), drank a coffee and chatted about South Africa, my mind wandered to how folks born in poverty and nurtured in the crucible of potential violence can become leaders of peace. 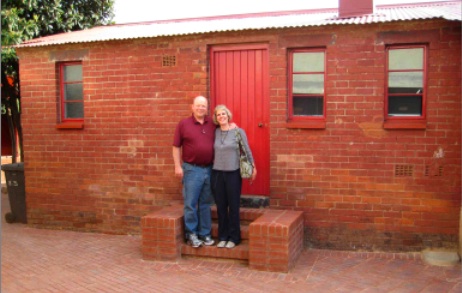