Luke wrote two books and so he asks Jesus, who is approvingly nodding
his head at the table, for an extended time to go overtime. After
describing for us that this Messiah did create a new kind of Passover
meal called the Lord’s supper, Luke tells us that Jesus was crucified
by the evil empire and that he was gloriously raised from the dead.
Then Luke opens up a new book by reporting to us that God’s Spirit
descended on Pentecost to anoint not just Jesus but all those who were
in his family (and his mother and brothers are mentioned by Luke as now
in his kingdom family). Here’s what we learn:

If we treat Luke-Acts as the wiki-story that it is, then we will read the first few chapters of Acts as the continuation of the story that began in Luke 1 and 2 with Mary and Zechariah and John the Baptist. And we will read it as a continuation of Jesus’ first sermon, his Beatitudes, his answer to John, and his anticipation of the cross. So, now here are the words of Luke and I hope you read them slowly enough to pick up on all of Luke’s resonances with the previous passages because Luke lets it all converge right here: the community Mary wanted and Jesus announced arrived with Pentecost.

They devoted themselves to the apostles’ teaching and to fellowship, to the breaking of bread and to prayer.  Everyone was filled with awe at the many wonders and signs performed by the apostles.  All the believers were together and had everything in common.  They sold property and possessions to give to anyone who had need.  Every day they continued to meet together in the temple courts. They broke bread in their homes and ate together with glad and sincere hearts,  praising God and enjoying the favor of all the people. And the Lord added to their number daily those who were being saved (2:42-47).

Here we find a society marked by:

*    Restoration with God in prayer and miracles
*    Connection to Jesus through the apostolic teaching and leadership
*    Elimination of injustices and impoverishment and hunger by caring for one another
*    Engaging the culture around them with the gospel.
*    Serving instead of seeking power

Here in Jerusalem we see what Luke’s wiki-story was leading us to expect: the kingdom community of faith now alive and well on earth. It’s not all that big; it’s not powerful. Instead, it is a humble, cross-shaped community of a few believers living just as Jesus summoned them to live.

Once again, we ask Luke this question: If the kingdom is the solution, what was the problem? The community of God gone awry. What is the solution? A community standing on its feet, heart transformed, eyes and ears open, and a willingness to live as one.
Let’s return to the gospel that deconstructs the church and offer its alternative:

God loves you and everyone else and has a plan for us: the kingdom community.

The good news is that Jesus lived for you, died for you, was raised for you, and sent the Spirit for you – so you all can live as the beloved community.

If you enter into Jesus’ story, by repentance and faith, you can be reconnected to God, to yourself, to others, and to this world.

Those who are reconnected like this will live now as God’s community and will find themselves eternally in union with God and communion with others.

Those who preach this gospel will not deconstruct the church. Instead, they will participate in what God is doing: constructing the kingdom community even now. 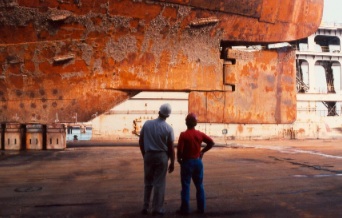