Walter Brueggemann on the Bible’s view of economics. (HT: JD)

David Cramer has come out as a pacifist and has a number of informed discussions. A Christian by any other name: Lisa Miller. Dan Reid takes on Tom Wright. An excellent meditation by Mark Wylie. Cyber-communities with TSK. Nice (but only if read slowly). I can count on Eugene to put things in perspective. Jim Martin‘s breath of fresh air. (We expect to see Jim today down in Texas.)

Edsel’s back. And so are the laments.

Pittsburgh is establishing a Formation House (Karen Sloan’s involved); check it out to see if you are interested.

I really liked the post and conversation at Tom Ward’s FB site, and don’t know if you have to be a FB member to get to it. Anyway, read it if you can. Julie Clawson wonders aloud — as in “grieves” — about emerging Christians and how their children can be taught (think SS class curriculum) in the emerging way. Some things can’t be given away.

And some things are hard to explain.

Rev! Mag interview about The Blue Parakeet: Rethinking How You Read the Bible

. Our Fasting: The Ancient Practices

is going Korean with the IVP group there — but it could take more than a year.

Quote of the Week: “This is the biggest generational transfer of wealth in the history of
the world. If you’re an 18-year old middle-class hopeychanger, look at
the way your parents and grandparents live: It’s not going to be like
that for you. You’re going to have a smaller house, and a smaller car —
if not a basement flat and a bus ticket. You didn’t get us into this
catastrophe. But you’re going to be stuck with the tab, just like the
Germans got stuck with paying reparations for the catastrophe of the
First World War. True, the Germans were actually in the war, whereas in
the current crisis you guys were just goofing around at school, dozing
through Diversity Studies and hoping to ace Anger Management class. But
tough. That’s the way it goes.” Wow, that’s harsh.

1. A machine that transforms ingredients into a pizza in about 3 minutes. Hide the kids.
2. And I thought fishermen were liars. (HT: TD)
3. The internet at 20 yrs old. (HT: TD)
4. Arkansas is discussing the wrong thing.
5. Very sad news.
6. Funny and clever and a good shift from the bundles of money spent on prom.
7. Volunteering, esp by the unemployed, is up at non-profits.
8. Will you be using Kosmix?
9. Memory … fascinating stuff.
10. What kind of cook are you? 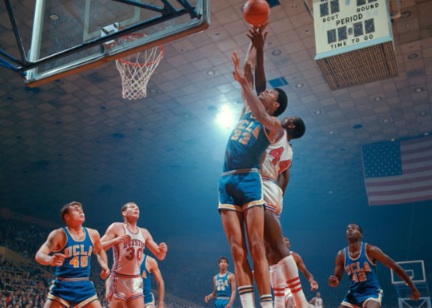 The greatest rivalry I’ve seen in NCAA basketball, even more than Larry Bird and Magic Johnson, was between Lew Alcindor and the Big E. How many players in this picture can you name?

I would rate Jim Thorpe and Babe Didrikson Zaharias as the top two. Michael Jordan’s baseball days were anything but spectacular. Bo Jackson was better than Michael, but neither rivals Jim and Babe.

read next post
What's your favorite ...
archives most recent
More from Beliefnet and our partners
previous posts