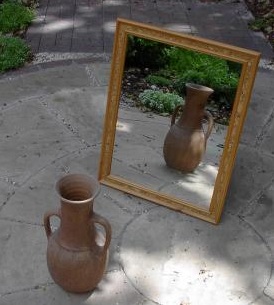 Knowledge of the “word” (logos) is not enough for James. Any listening that does not lead to doing is not proper listening and is not enough. So James says in 1:22-25:

22 Do not merely listen to the word, and so deceive yourselves. Do what it says. 23 Anyone who listens to the word but does not do what it says is like a man who looks at his face in a mirror 24 and, after looking at himself, goes away and immediately forgets what he looks like. 25 But
the man who looks intently into the perfect law that gives freedom, and
continues to do this, not forgetting what he has heard, but doing it-he
will be blessed in what he does.

James’ image is clever. In fact, it’s comedic at one level and tragic at another: no one, of course, looks into a mirror in the morning in order to see what she or he looks like and then does nothing about it, except the one who thinks he or she can listen to the “logos” and listen to what it says and not do what it says.

Our James commentary will focus a bit (in the notes) on aspectual theory and I want to draw your attention to one point here: “the one who peers” is sometimes understood as “the one who continually stares.” Thus, it refers to a pattern rather than a single glance. This may be true in reality, but James does not use the present tense here in order to describe how often the person peered into the mirror but he chooses the present in order to sketch the scene before his readers/listeners with vividness. This is the sort of behavior he wants to sketch: the one who peers and walks away and does nothing about what he or she has seen.

Education, Discipleship, and the Future 2 (RJS)
archives most recent
More from Beliefnet and our partners
previous posts