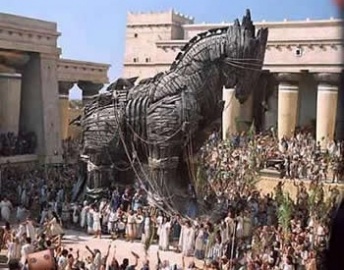 James looks into the eyes and hearts of the oppressed and poor messianists, now scattered from home and facing oppression at the hands of the rich — the odds are against them. He looks at them and tells the to keep their heads up because God is good and God will make things right SomeDay. He tells them not to blame God for the situations. And he narrows the scope down to the temptation problem and says this:

13 When tempted, no one should say, “God is tempting me.” For God cannot be tempted by evil, nor does he tempt anyone; 14 but each one is tempted when, by his own evil desire, he is dragged away and enticed. 15 Then, after desire has conceived, it gives birth to sin; and sin, when it is full-grown, gives birth to death.

Sin leads to death. But the origin of sin is not located in original sin but in human desire. In other words, he says “Take responsiblity yourself.”

I would not add the word “evil” in this text; all James says is “by his/one’s own desire.” James locates the origins of sin in this text in human lusting and yearning desiring.

James uses a term for lust, but he thinks of the yearning desires of the messianists instead of sexual desires. These desires were at work in the use of violence (1:20) and even violent outbursts against one another (4:1-2). I’m not sure if these can be tied here, since James is using a more general expression in 1:13-15, but he clearly ties sin to the human impulse of yearning.

We sin, he says, because we want what God does not design for us to want.