I have been using the term “NeoReformed” now for a year or two and a few of my friends have asked me what I mean and why I don’t just calls such folks “Reformed”. This post will sketch who they are and why I call them “Neo” Reformed. I begin with a confession: I’m not a Calvinist; I’m an anabaptist. But, I have never had any problems with the variety of theologies at work in the big tent of evangelicalism. Calvinists are not only among us, they have important elements to bring to the table. I’ve sat on the essence of this post for months, but I think it is time for us to make it public. I do so with a certain degree of sadness, but feel compelled to call us to a unity that is presently threatened.

The evangelical tent is big enough to welcome to the table Calvinists and Arminians, anabaptists and charismatics, and I love it when Catholics and the Orthodox join us. This is not a personal battle for me with Calvinists; it’s a particular kind of divisive Calvinist that I have in view.

Formerly the disagreements with Calvinists or the ones they had with others didn’t stop us from gathering inside the big tent. But in the last decade something happened, and I call it the rise of the NeoReformed. Here we go but first a question or two:

Are you seeing a rise of reformed folks? Do you see some militancy — whatever their strengths? What are your thoughts? Why do you think some youth are attracted to this new form of Reformed theology? 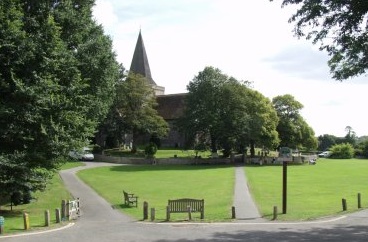 One of my favorite Reformed theologians is Michael Horton. We don’t agree on theology but I like this guy and I like to read his stuff. Michael recently wrote a piece that uses a different image than the big tent image above. He says evangelicalism is like the village green of early American communities. It was where folks, all folks, gathered to chat and share commonalities. He says evangelicalism is the village green but evangelicalism is not the church. Churches have confessions, and his confession is Reformed. He says we need to worship in our churches and that the village green is not enough; it is where we join with Christians most like us. The key point I make here is the distinction between being evangelical and being Reformed. Michael Horton, I am assuming, thinks the best form of evangelicalism is Reformed; and he probably thinks Arminians and Anabaptists are wrong at some important points. Fine. (I think the same of Reformed, and I think they are sometimes wrong at central points.) But Michael Horton knows that a local church (or denomination) is not the village green. I agree with him 100%.

But … and here’s our problem…

The NeoReformed, for a variety of reasons, some of them good, don’t recognize that evangelicalism as a village green. Instead, they want to build a gate at the gate-less village green and require Reformed confessions and credentials to enter onto the village green. Put differently, they think the only legitimate and the only faithful evangelicals are Reformed. Really Reformed. In other words, they are “confessing” evangelicals. The only true evangelical is a Reformed evangelical. They are more than happy to call into question the legitimacy and fidelity of any evangelical who doesn’t believe in classic Reformed doctrines, like double predestination. The palpable observation here is that many of us think the NeoReformed are as attached to Tradition (read Westminster etc) as they are to sola scriptura.

In effect, the NeoReformed are a new form of Fundamentalism, so one might describe them accurately as the NeoFundamentalists. Which means they seem to need a trend or an opponent upon whom they can vent their frustrations (see Rene Girard). This results in two clear traits: the exaltation of some peripheral doctrine to central status and the demonization of a person. The goal in such cases seems to be to win at all costs.

I close with this:

I recently wrote to a friend of mine, a Reformed theologian, and described what is the essence of this post and this is what he wrote back:

The problem, as I see it is these, whom you are calling neoreformed, are to me simply the old fundamentalists in nicer clothes with better vocabularies.  They are just as mean-spirited, just as graceless, and just as exclusive.  I believe that the fundamentalism of my youth was harmful to the gospel. I believe that anyone who refuses to come out of his “room” (confessional church) and into the hall of “mere Christianity”, to use Lewis’s term, is doomed to a narrow and problematic exegesis of the text.  Who is going to tell us that we are wrong if we only stay in our room and speak to people who agree with us all the time?