We are looking at the rise of the NeoReformed; we began Monday and this is part two. 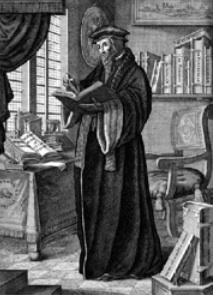 The NeoReformed movement of which I speak is an attempt to capture evangelicalism, redefine it by some clearly-defined doctrines that are Reformed, and kick the
rest of us — and there are lots more “of us” than the NeoReformed —
off the village green. When we are in need of profound degrees of
cooperation (as we see in someone like J.I. Packer), we are finding a
division of the evangelical village green. No, in fact, they are not
dividing the village green; they are constructing a Reformed fence
around it. (Well, maybe not. The impact of what I see going on with the
NeoReformed will result in a division of evangelicalism.)

Are you sensing a division? one coming? Do you think there’s room in the tent for us all? What are the themes in theology that seem most divisive?

Furthermore,
the NeoReformed have come to equate the meaning of “gospel” with Calvin’s “Reformed
theology.” And those who aren’t Reformed are somehow or in some ways
denying the gospel itself. When gospel is equated with double predestination, often said in harsh terms, we are seeing a good example of the spirit
of a NeoReformed approach. This leads, inevitably,  to seeing what
they call the “doctrines of grace” as defining both “gospel” and
“evangelical.”

The groups they’ve chosen to exclude witness to
the new kind of Reformed. The sweeping impacts of the Finney revivals
and Wesleyan gospel preaching and the charismatics are simply not, in
the view of the NeoReformed, evangelicals. Anabaptists aren’t even on
the map. A number of historians have clearly demonstrated that evangelicalism in
the USA cannot be properly understood without reference to the powerful
revivals of the Wesleyans; one thinks of David Hempton or Donald Dayton. Their careful studies on the
rise of American evangelicalism are often ignored. The approach of Mark
Noll and David Bebbington, which is broader based than just a list of
Reformed theological ideas, is also rejected as inaccurate.

Oddly
enough, a group not formerly connected with evangelicalism, the
Southern Baptists, have (from the Reagan years on) become increasingly
associated with evangelicalism. And many of them are now advocating
very strong forms of Calvinism — something previously not at all
characteristic of the SBC. I could be wrong here, but my own reading of
Southern Baptist stuff over the years shows a dramatic rise of
Calvinism and a desire to be called evangelicals. I’m open to hear how the SBC see this trend.

And here’s another issue: the NeoReformed are deeply concerned
with complementarianism and see it as a test case of fidelity. Fine, argue your points, but
complementarianism is hardly the center of orthodoxy. You wouldn’t know
that by the way they write or talk. Some see it as the litmus test of
evangelical orthodoxy these days. This grieves me. Don’t we have more significant battles to wage?

And they also have chosen to make one
of their targets today the New Perspective on Paul, and for some odd
reason they’ve landed squarely on the door step of Tom Wright. They see
him as the problem. The Problem. When Tom Wright is our problem, it
is we who have the problem. I blurbed Tom Wright’s book recently with some strong words, and one blogger posted my blurb — a
blogger who had not read Tom Wright’s book — and it drew within one
day about 75 comments, and I’m pretty sure only one commenter on the
entire thread had read both Piper’s book and Wright’s book. The rest
were pretty sure I was wrong. Those who were all riled up about the
blurb are the NeoReformed — ironically, they were wondering who I had
in mind when I used “NeoReformed” in the blurb. I thought that was
obvious.

If I had to sum it up I’d put it this way: the
NeoReformed are those who are obsessed with God’s holiness and grace
and have not learned that grace makes people gracious. These folks are
America’s newest religious zealots and they are wounding, perhaps for a
generation or two, evangelicalism.

What are options? I keep asking myself. Welcome one another in a common mission or send those we don’t agree with to another location?

Make your decision. Our decision, friends, will shape the future of American evangelicalism. I pray to God we will find a way to focus on the mission of God.