Weekly Meanderings (Back in action)

The Hockey players of this world, being huge Cubs fans, couldn’t wait until April and decided to play a game … of hockey (I forgive ’em) … at Wrigley. I know someone from O! Canada! who came down to watch the NHL Winter Classic (Detroit vs. Chicago) at Wrigley. 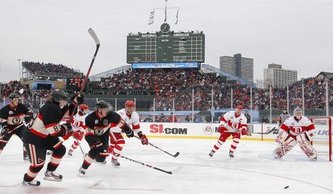 Seeing this ice hockey makes me think of Minnesota, which leads me to this: If I were not busy, I’d love to participate in this conference on pietism at Bethel, up in Minnesota. Outstanding list of speakers and great topics. I heartily endorse it. Along with this, ever consider studying with Reclaiming the Mind?

The best thing I read this last week, and in my top five for the year. Tim Keller. My favorite paragraph: “People who live in the moral-performance narrative use sarcastic,
self-righteous putdown humor, or have no sense of humor at all. Lewis
speaks of “the unsmiling concentration upon Self, which is the mark of
hell.” The gospel, however, creates a gentle sense of irony. We find a
lot to laugh at, starting with our own weaknesses. They don’t threaten
us anymore because our ultimate worth is not based on our record or
performance.” Thanks Pastor Keller. A good word, a timely word, a good reminder.

I deeply appreciate Mark Galli’s leadership and CT’s commitment to thinking through financial issues as well endure economic stresses in one form or another. And this piece about what pastors know of the parishioners’ debts is worth clipping as a reminder.

Missional Tribe… keep your eye on on this one. And Ben Wheatley coins the expression for “MINO” — mission in name only. Take his test: Are you mino? One of Adam Hamilton’s points yesterday was the end of conservatism and the rise of a third way or a gravitation to the center; read John Armstrong’s sketch of Remini’s study with a similar conclusion. The next BIG things in the Christian world and then a video here — and you must read their little captions — hilarious. To Lukas from Lukas — a great tradition now in its second generation. Jim Martin finishes his series for pastors. Here’s a pastor vexed about injustices and pleading with Christians to develop some righteous indignation. All over a blurb that had some righteous indignation?

And how are folks entering the emerging conversation? (Julie’s post and conversation.) 40 Days of Chesed — see Peggy’s series. Advice for preachers from iMonk — very insightful. I like Don Johnson’s sense of aesthetics (which he gets from Martha) and space. Nice conversation of David Fitch and Ed Stetzer. L.L. Barkat’s reflections on Mary and art. My friend Bob Robinson reviews Mike Wittmer’s book.

North Park’s highlights of 2008. Just in case you aren’t aware of it, our tuition is $6000 below the national average and we have a new initiative for financial help next Fall (for merit and need-based students).

What percent of your free time is online?

Ed Dobson lives like Jesus for a year. (HT: TG)

There’s a depressing mood hovering over this kind of confession.

Thanks Julie and J.R. and Englewood Review of Books.

Are we headed for Great Depression II?

1. Some Muslims were removed from a plane recently as a result of a complaint. We can all appreciate the security concerns of our airports; however, alongside racial/religious suspicion, the profiling method can become another form of oppression and must be denounced. I believe also that this was an opportunity for Muslim leaders to show the connection of profiling to terrorists and then to denounce Islamic terrorism.
2. Luke’s evaluation of Indio and Sol in Mexico; I had two swallows of Indio and tossed the rest out. I drank the vino tinto. It, too, was taste-challenged. Awesome otherwise.
3. What has become of Obama’s Chicago church?

We interrupt our Weekly Meanderings to give you time to clean out your pantry and stock it with some new foodstuffs.

4. Aging, memory and glucose.
5. A wide-ranging, and sometimes apocalyptic and hysterical, set of anticipations of what faith and 2009 will look like.
6. Blago and the Senate appointment.
7. What counts as a service animal?
8. Business and ethics: doing good and doing well?

9. Chicago’s 70,000 dollar cappuccino caper — at least they’re thinking of good coffee.
10. For the techies of this world!
11. For those who care about Westminster’s recent decisions.

When the Vikings went down last Sunday, i
t ended the season for the NFL Central, the worst division in football. A fitting end for a flimsy division.

Florida was just better than Oklahoma.

Rutgers had the Tennessee Lady Vols down by 20 at halftime and bungled the game away.

Does anyone have the story of Gene Keady’s hair? When he coached Purdue no one cared; but now that’s he’s a commentator … good grief.