At Peace With Science? (RJS)

Scot having tried his hand at science a couple of weeks ago (here), I (RJS) will step up to bat once again and start to tackle what may be the toughest question in the science and faith discussion.

We have been carrying on a conversation dealing with the hard questions in the relationship, sometimes conflict, between scientific knowing, scripture, and the faith.  Much of this conversation has centered around books – and there are many good books available to focus discussion.  The internet age has also made readily available a much broader range of resources. The Faraday Institute for Science and Religion at St. Edmunds College,
Cambridge has an excellent collection of lectures on topics of interest
available for download in mp3 audio and in video formats. Driving home after the holidays last weekend I listened to several
of these lectures. It was a profitable way to pass an 11 hour
drive. Today I would like to focus our conversation on two of these lectures, more will find their way into our conversation in future posts.

Two very similar lectures on Human Evolution were delivered by Professor Darrel R. Falk 24/7/2008 and 5/11/2008. The July 24th lecture was part of a summer course for scientists while the Nov. 5th lecture was for an audience comprised primarily of church leaders. Dr. Falk is Professor of Biology and Chair of the Biology Department at Point Loma Nazarene University in San Diego, California. In 2004 he published a book: Coming to Peace With Science: Bridging the Worlds Between Faith and Biology, the kind of book that has helped many trying to reconcile science and faith, but also the kind of book that resulted in an effort by some in the constituency of his University to have him fired.

In the opening of his lecture of  24/7/2008 Dr. Falk relates his experience speaking in his defense.  He gave his personal testimony of faith, presented the testimony of former students in his defense, and related the beauty of the evolutionary mechanism of God’s creation. All went well, a standing ovation even, until the President of the University opened the floor for questions and the question of human evolution was raised.  When Dr. Falk defended human evolution and common descent the change in mood was immediate and palpable.  This was neither surprising nor unexpected.  Many in evangelical circles are open to the possibility that evolution was God’s general method of creation – yet will retain the necessity for the special creation of Human Beings through an original pair, Adam and Eve.

This is a critical question because the mounting evidence, most importantly the molecular genetic evidence emerging from the sequencing of human and other genomes, makes the foundation of special creation of the human species increasingly difficult to defend.  Twenty years ago it was possible, with full intellectual integrity, for a Christian scientist to make an exception for the human species based on faith, theology, and scripture; evolution as God’s general method of creation, but mankind as special creation. External resemblance, embryology, and even fossil evidence, are relatively easy to dismiss or rationalize. But the internal evidence encoded in the DNA of each and every one of us has changed the picture. Common descent is now as close to proven as anything in science in general, or biology in particular, ever can be.

So what is the evidence?  There are a multitude of lines – each convincing in its own right, but together irrefutable.  Dr. Falk highlights three strands of evidence, Alu sequences, Human Chromosome 2, and synonymous and nonsynonymous mutations.  Dr. Collins in The Language of God highlights Human Chromosome 2, ancient repetitive elements (AREs),  nonfunctional pseudogenes such as caspase 12, and the functional mutation of the FOXP2 gene…but these six examples are only the tip of the iceberg.

Chromosome 2 is a fascinating story – apes have 24 pairs of chromosomes while humans have 23.  This is of course a significant deviation. But human Chromosome 2 has clear evidence of fusion resulting from the head-to-head connection of two of the chromosomes found in chimpanzees and other apes, at some point in our development two chromosomes became one.  This fusion is marked by the presence of residual telomeres (end caps) within the fused human chromosome and by the presence of an inactive residual centromere in the exact location where it is found in the separate chromosome of the chimpanzee. 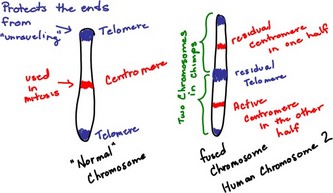 The presence of the unnecessary residual telomere and centromere within chromosome 2 is one strong thread of the evidence for common descent – humans and chimps evolving from a common ancestor with chromosome fusion occurring on the branch leading to humans but not on the branch leading to chimps.  Why would God create man from dust as a unique creature and introduce an unnecessary and unused telomere and centromere into chromosome 2?

The caspase 12 pseudogene provides us a similar example.  This gene is found in the same location in both chimps and humans – it is functional in chimps, but nonfunctional, having suffered a knockout mutation in humans.

Molecular support of this type could fill thousands of pages…and has convinced virtually all working biologists, biochemists, and scientists of all stripes, that the general scheme of evolution including common descent is unquestionably correct.  This is a jigsaw puzzle where the pieces fit beautifully within the framework of evolutionary theory. The only reason to doubt the general framework is a presupposition that it is not true.

This brings us back to the important question of the day – the story of creation. Genesis 1 conveys important theological truth:  In the beginning God created the heavens and the earth and everything on the earth.  The story is told in a form understandable to everyone everywhere – it is neither science nor academic history – it is our story. Sequence and method are not important, although the analogy with days of work followed by a day of rest may be significant in the telling of the story. But the culmination of the process – the creation of mankind in the image of God is clearly important.  Genesis 1 v. 27 tells us that God created man in his own image, in the image of God he created him; male and female He created them.

The scientific evidence for common descent sheds light on the material
(the dust so to speak) used by God to create mankind in his image, it
tells us nothing about what it means to be created in the image of God.
The genetic diversity in the human genome suggests the evolution and differentiation of our species within a breeding population of some 10,000 individuals ca.150,000 years ago.  These are estimates – but certainly accurate within a factor of two or so.  It is possible – scientifically speaking – that God breathed into an individual  within this breeding population a mutation, creating mankind in his image and defining our subsequent species. Rare favorable mutations, unique events, are embedded in the evidence we have and an integral part of the evolutionary process. To the atheist the evolution of man is a chance occurrence; to a Christian it is God’s plan. Two consistent explanations for the same event.  It is also possible – scientifically speaking – that these individuals created in the image of God rebelled immediately – and that this rebellion also taints the entire species.  But this is a subject for another day – today I would like to concentrate on the creation of mankind.

What makes mankind unique, created in the image of God – both “like God” and unlike animals? 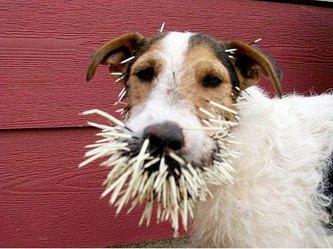