I recently read Anne Rice’s memoir (Called Out of Darkness: A Spiritual Confession

); the good folks at Beliefnet got me in touch with Anne for an interview — and I’m most grateful for her time and for her answers. Here is the first of two sets of questions:

Anne, your memoir singularly describes a girlhood of beauty and sensory experience and then a sensory-experience conversion, and my question is this: If it is accurate to observe a sensory dimension in your return to the Catholic Church, what would you say you were “lacking” at the sensory level that found resolution in conversion? 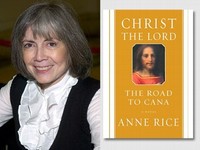 Your question is a challenging one, but I was not lacking at
the sensory level when I returned to the church. Rather the “going
home” was all the easier because the sensory elements of Catholicism
were still richly present, and they attracted me as much as an adult,
as they had attracted and satisfied me as a child.  But my life was
full of sensory elements at the time, especially paintings by my
husband, religious statues that I had collected, numerous photographs
of gorgeous places I had visited, etc.   The underlining key is this:
Catholicism does embrace the senses, and has never sought to “purify”
its sensuous elements, and for this reason I feel very comfortable in
my childhood church.  The mystery of the Eucharist which drew me back
to the church is enshrined in sensuous elements: the golden tabernacle,
the ritual of the Mass, the incense, bells, the ritual of receiving
communion etc.  I should add that as a child, I was shaped by this
sensuality, and it marks all my work.

In reading your story I was struck by a spatial pattern: in New
Orleans as a child you had faith, out of New Orleans you lost your
faith, and when you returned to New Orleans your faith was re-awakened.
Can you reflect on the significance of “space” (even “sacred space”)
for your reconversion?

There is no doubt that my return to New Orleans heavily
influenced me to return to my church.  I like to believe, however, that
the conversion would have come no matter where I was.  But I think in
going home to New Orleans in 1988, I was in a way searching for my lost
faith.  I thought I was seeking my lost city and my lost childhood, but
I was also a pilgrim wandering back to the shrines of childhood to pray
for guidance, whether I admitted it to myself or not.

I had no real conversation with either Stan or Christopher
about going back to the church, except for the notable exchange with
Christopher mentioned in the book, in which I asked if he believed in
God and he told me that he did.  I avoided discussing the matter with
them because the matter for me was of the utmost importance and I did

not care to influenced in any negative way by their ideas on the
subject.  After my return, I simply told them that I had done it.  When
Stan sought from time to time to engage me in light argument about it,
something that I think would have amused him, I simply did not respond.
I made up my mind I would not argue faith with him.  I didn’t think
that Stan was well informed enough to discuss the matter, and I
protected myself from casual argument by simply not doing it.
Christopher occasionally mentioned it but I don’t recall an intense
conversations.  He knows how proud I am of him and of his writing and
his life, and the matter does not divide us.  Occasionally he comes to
Mass with me, at my request.
read next post
Acts of Advent 14
archives most recent
More from Beliefnet and our partners
previous posts