St Francis made a guest appearance for Kris and me, and he was willing to permit his picture to be taken. Whenever anyone tossed some euros in his little bucket, he bent over, and rang his little bell. He drew a crowd. He never appeared at the Basilica, in which picture you can see Pax and the Tau cross of St. Francis. 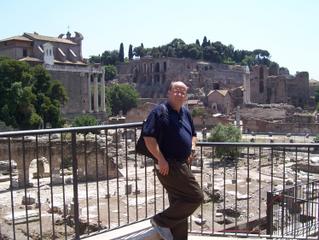