Caregiving Issues from a Broadway Star 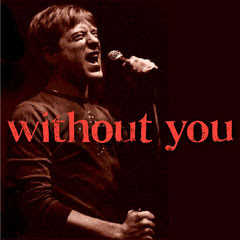 The other night I did something I haven’t done in a long time. I walked away from writing, and housework, and “go thorough stacks of paper night” to go to a show.
Anthony Rapp chose Pittsburgh’s City Theater to launch a show he co-wrote based on his NY Times best-selling memoirs, called Without You.
Rapp is one of the original stars of the wildly popular, award-winning Broadway Rock Opera, and film, Rent. My husband and I got to see him perform shortly after the show’s young creator, Jonathan Larson, died suddenly.
Without You revolves around Rapp’s personal stories of love and loss. It touches on what it was like for Rapp to audition and win the lead part of Marc in Rent. It also tells a very personal, emotional story of how he dealt with his mother’s long, hard battle with cancer.
Rapp was living in New York city, but would fly back home to see her. Every visit, he would wonder how she would look, and how she would sound.
Rapp tells stories that highlight the different family personalities that come out during tough times. And then, when talking and singing extremely touching songs about his mother as she was close to death, he screamed feelings that I think many caregivers are afraid to even think.
Rapp doesn’t hide his anger. Why did his mom have to be sick like that? Why did he have to see her like that? It was heart-wrenching and uncomfortable to hear; but also strangely inspirational.
There are definitely angry caregivers out there; and I think it’s important for those caregivers to know that it’s OK for them to feel that way.
Some of the experts I’ve talked to for Take Care! tell me that most of that anger is rooted in the situation, not at the person. When a loved one is sick or dying, it’s actually 100% normal to feel upset, and even mad. But, many caregivers don’t allow themselves the freedom to experience those kinds of feelings. They work hard to block any negative feelings out; so that they can go about their job of trying to keep everyone happy and calm.
Part of the reason so many audiences love Rent is that it sends out a big message for people to do what they need to do to LIVE with disease; instead of die from it. Rapp seems to support that way of thinking and has formed healthy thoughts about pushing through tough times to get to the other side. He joined the Board of Directors for a NY based caregiving support group called Friends in Deed.
After the show, I got to talk with Rapp about Take Care! and about the caregiving themes I felt coming through in his show. He agreed to an interview for the book. I’m looking forward to talking with him.
j.
read next post
Online Support for Caregivers
archives most recent
More from Beliefnet and our partners
previous posts

Thank you for visiting Jennifer Cares page. This blog is no longer being updated. Please enjoy the archives. Here are some other blogs you may also enjoy: Inspiration Report Beyond Gorgeous Happy Reading!!!

I'll Take Time for Me: Resolutions for Caregivers

Were you too overwhelmed, or did you make some New Year’s Resolutions this year? If you did, how are you doing so far with keeping them? If you didn’t, I have some suggestions! (We say we don’t like it, but sometimes it is nice to be told what to do).  I’ve come up with some […]

I love living in Pittsburgh, PA…love our champion sports teams! Tonight, the Pittsburgh Penguins are in the international spotlight, playing in the Winter Classic. Our Heinz Field, home of the Pittsrbugh Steelers, has been turned into a skating rink for the event. After weeks of below freezing temperatures here, tonight, it’s 50 degrees and very […]