Where are the Temple treasures?

For this is what the Lord Almighty says about the pillars, the bronze Sea, the movable stands and the other articles that are left in this city, which Nebuchadnezzar king of Babylon did not take away when he carried Jehoiachin son of Jehoiakim king of Judah into exile from Jerusalem to Babylon, along with all the nobles of Judah and Jerusalem— yes, this is what the Lord Almighty, the God of Israel, says about the things that are left in the house of the Lord and in the palace of the king of Judah and in Jerusalem: ‘They will be taken to Babylon and there they will remain until the day I come for them,’ declares the Lord. ‘Then I will bring them back and restore them to this place.’ (Jeremiah 27:19-22)

No one knows exactly what happened to the Temple treasures in Jerusalem, after the Babylonian siege in the sixth century B.C. The famed Ark of the covenant seems to have “disappeared” from history at that point.

Later, it would seem that the 10th Roman Legion carried away Temple treasures after their siege of the Holy City, in A.D. 70. In fact, a relief in Rome today bears an image of legionnaires carrying aloft the menorah, the multi-branched candlestick. Today, in the Old City of Jerusalem, a solid gold replica, under glass, overlooks the Temple Mount, and those who wish to rebuild the Temple intend to use this menorah there.

It is interesting that in the book of Jeremiah, the Lord talks about the “articles of the Lord’s house” carried away by Babylon’s King Nebuchadnezzar. In chapter 28, just as He’d promised, God sees them returned. We are not told specifically which articles and vessels, but we can assume from the passage that these refer to items used in the Temple.

In our world today, Bible prophecy enthusiasts spend a lot of time wondering where the Ark of the covenant is. Some say it is underneath the Temple Mount, in some underground cavern.

Certain Temple Mount groups today have been busy restoring the vessels needed for Temple worship, right down to the priest’s garments. Others, of course, see such a view as starting World War III, offending Muslims worldwide.

Whatever one’s view, it is profoundly interesting to see the menorah “biding its time” so near the Temple Mount. 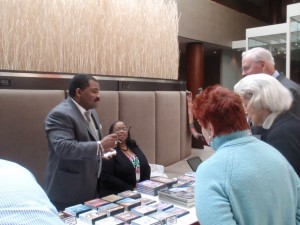 Evangelicals Against Bible Prophecy?
archives most recent
More from Beliefnet and our partners
previous posts