Virginia Beach Shooting Victim Sacrificed His Life For Others, Called a ‘Guardian Angel’ For Protecting Those Around Him

“You knew from the start that he would lay down his life for anybody. And that’s exactly what he did…”

Survivors of the mass shooting at a public works building in Virginia Beach are saying Ryan “Keith” Cox gave his life to save theirs and others.

While a dozen people were killed, survivors also say that the numbers would have been much higher if Cox had not shown the heroism he did.

Christ Dewar, a city employee shared with the Virginian-Pilot that she and seven others ran into Cox after people in her office were yelling that there was an active shooter. She said that he instructed the group to hide in an office and barricade themselves in.

“If at all possible, I knew he was going to lead us to safety. We felt safe. He stayed calm. He didn’t have any anxious thought in his voice,” Dewar told the Pilot.

DeWayne Craddock was close to their location so they were not safe leaving the building.

Looking back at the moments leading to Cox’s death, she remembered him saying, “Get in Lori’s office now. Barricade the office. Get in there.” Dewar tried to get Cox to come with them in the office but he refused.

“I gotta check on everybody else,” he said.

The group listened to Cox’s instructions, barricading themselves into a co-workers office. Not long after, Craddock let off four rounds in the room in an attempt to breach the office.

Multiple news outlets reported that it was somewhere in-between this moment and the time police arrived that Craddock shot and killed Cox.

He is now being recognized by family, friends and the community as a guardian angel for those whose lives he saved. He died a hero saving lives.

For those who knew him, they said he was soft-spoken. He was a choir member at New Hope Baptist Church where his father is a pastor. He is

“You knew from the start that he would lay down his life for anybody. And that’s exactly what he did,” Dewar told the Pilot. 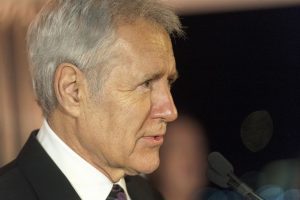